In discussing our long list of potential 2013 Grand Prize winners, the writer William Least Heat-Moon came up in conversation. He's a writer I kind of forgot about though I remember reading his book, PrairyErth, when I was an undergraduate and being amazed by it. The book chronicles the writer's journey on foot through a rural county of Kansas, the people he meets, the stories he hears. As in his earlier book, Blue Highways (though this one spans a larger geographical area), Heat-Moon is a fascinating travel companion. He is so open to people, almost never judgemental, and his analyses and reflections seem to represent a time in North America that is long gone (though the book is only 30 years old).

I've been re-reading Blue Highways this week and I am struck again at the complexity of thought that emanates from a simple journey. Before cell phones, before Google maps, the author has to learn about where he goes by talking to the local people, hearing their colourful language and historical memories contained in day to day stories. 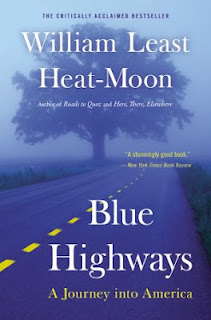 There is also a good deal about class though not overtly: the people he meets are often poor, uneducated, both suspicious of and open to "Northerners" or city people (outsiders generally). But the author delves into their stories as if these poor and isolated rural people were the movers and shakers. Like Studs Terkel, who also overcame that writer's knee-jerk tendency towards misanthropy, Heat-Moon finds value in those lives we often don't value.

Though I am no Luddite, Blue Highways resonates with me because it underscores the isolation that is more common in our contemporary lives. We all have such vast pools of knowledge at our fingertips but that ability also cuts us off from one another, all staring into our own separate illuminated boxes, countless faces all staring into these machines late into the night, fewer face to face conversations, less understanding of each other through just sitting down and getting the story directly from those who live it.

Peppered with photographs of the people he meets on his journey, the book is as visually appealing as it is textually engaging. In fact, a CNN piece I found last night revisits some of the people and places the author features in his book, thirty years later.

It's been a real treat re-connecting with this writer who I was such a fan of when I was in my early 20s. Often writers we like when we are young we grow out of, but not in this case. I hope I feel as thrilled to read William Least Heat-Moon in another 20 years.
Posted by Gregory McCormick at 6/06/2012 11:44:00 AM