The movie Borgman by Dutch director Alex van Warmerdam is quite a ride. A bizarre movie. You know, that kind of movie you are sitting in and you are so perplexed and excited by what's happening that afterwards you need to just sit down on a park bench and process what you just saw. 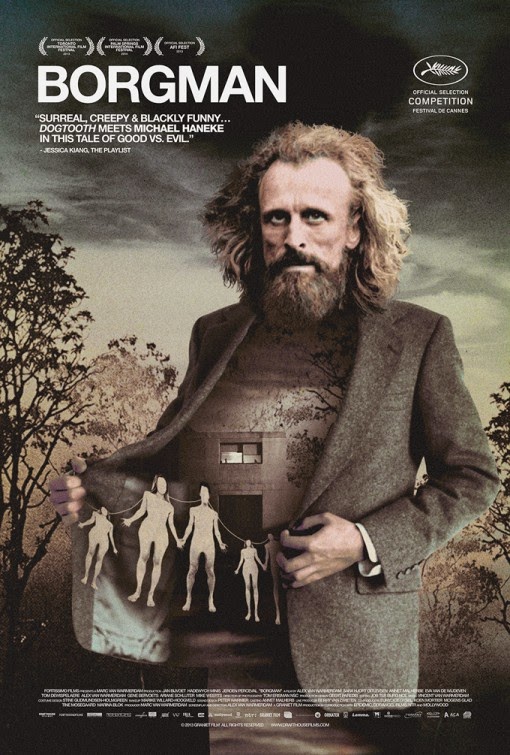 The film starts with an almost throwaway epigraph: "And they descended upon the Earth to strengthen their ranks" and the camera pans a spring countryside that has not yet come to life. Swarthy-looking men are gathering, getting weapons (one is a priest) and deliberately moving towards something violent. But we are left in the dark, never sure where our footing is. Nor is this conflict ever really explained or detailed.

Men are hiding in the Earth underground and when they hear the other men with guns and swords approaching, they escape. Barely. This is not a mystical or CGI kind of experience. It's quite literal and very engaging: men running through thickets of trees, terrified of getting caught.

Then later, one of these men (looking like a homeless guy) shows up at the door of a wealthy Dutch family and asks if he can take a bath. When he is turned away, violence erupts but now it's too late: the sympathetic wife secrets him into the back guesthouse after the husband has left for work. Is this homeless-looking man up to something nefarious? Clearly he is but it's never made clear. Later his friends join him in the seduction of this family and the movie continues along almost like a parable, an allegory though there is no nice framework to set alongside the movie that makes the parable-like allusions clear.

I kept asking: "What is happening?" from beginning to end. It's not that it didn't make sense logically but there is no sense of  movie-logic here: things move along as if pre-destined and the actions of the characters are not mandated by free will. Other odd allusions: X's mysteriously tattooed on backs; scars on characters' bodies; surgeries being done on children which are never explained. Issues of class play in the background but nothing is ever determined nor is there a "message" to take away. Is it a treatise on destiny or fate? Are we supposed to feel nihilistic at the way our class determines our futures so that we have very little free will in shaping our own futures? Or is this reading too much into it?

It's a very interesting film and one I want to see again if only to get closer to some kind of resolution. Make more mistake: one doesn't leave this film understanding anything more than when one first arrives at it. But in terms of how movies operate, it's worth seeing and the acting is stellar.

Borgman is playing at Cinema du Parc all this week and next.

Kiss of the Spider Woman by Manuel Puig

I was over at a friend's place the other day and she had a copy of Manuel Puig's Kiss of the Spider Woman on her coffee table. Since she (like me) is surrounded by books, I knew she wouldn't miss one so I asked if I could borrow it.

The next day, I read most of it in one sitting. It's a fascinating novel. The book starts out as a conversation between two unnamed characters and it's only as the story progresses that the details are fleshed out: the two are in prison and are sharing a cell. One is a political prisoner and we learn more and more about his tale as he opens up to his cell mate. The other is in prison for "unnatural" acts (basically for cross-dressing though there is some intimation that he slept with someone underage). Molina (the trans character) tells the plots of movies to the other to pass the time which raises all kinds of limitations to their viewpoints. Valentin (the revolutionary) is allergic to bourgeois morality and values (materialism, romantic love), something which the overly romantic Molina needs to survive. Notions of performing genders comes into play here, Molina adopts the guise of the woman that he feels he is by modeling his notions of gender, his values, his approach to love, etc., on movies and how he sees biological women perform their genders. 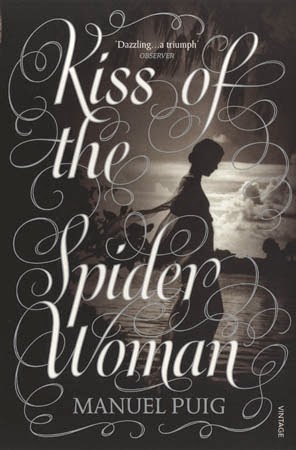 For Valentin, though, being together with Molina allows him to express his vulnerabilities in a way that he's never been able to, admitting his own fears, his own views of his weaknesses, the ways he doesn't conform to the blustery machismo he performs in his own right (even if he is also an intellectual and a leftist).

The edition I have has all these annotations which relate to Freudian theories of sexual development which are highly irritating (pages and pages of psychosexual longings that are spelled out in clinical and theoretical terms, etc.) that seem only tangentially related to the story (besides, I don't need someone pointing out all the Freudian references in the plot, thank you very much). I'm not sure if these insertions are part of Puig's original or if they were added in by the translator and/or editor of the American edition. At any rate, they make the work feel incredibly dated. Also the views of homosexuality seem dated as well: though the writer is compassionate, we've come a long way since the mid-70s on defining gay identity and trans-identities which all seem to get lumped together as part and parcel of homosexuality.

But besides the above, the novel itself is really interesting. Formally it's unusual but there are so many things worth thinking about here: gender, class, leftist politics, Argentine politics, power. I won't give away much more but suffice it to say that this book is a great summer read and I wish that Manuel Puig were better known.

The movie version of this came out when I was in my very early teens though I don't think I've ever seen it. Still, I might wait a few months and then rent the film though typically I try to see the movie before I read the book whenever possible. William Hurt won an Academic Award for his Molina and Raul Julia (an actor whose work I really liked) plays Valentin. Julia died young in 1994.
Posted by Gregory McCormick at 7/09/2014 10:27:00 AM No comments: