A new book out by McGill-Queen's Press has been enthralling me the last few days, that kind of book that you have constantly in the back your mind, finding it hard to wait until you have a few extra minutes to sit down (today, mid November, it was warm enough to sit outside on a park bench!) and read at lunch. 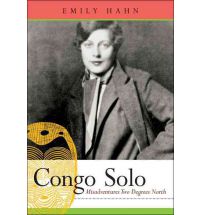 The book is a "re-edition" of a book originally published in 1931, but which was so censured and cut that it lacked a real narrative integrity. Apparently (according to the introduction), the writer and mainly publisher were worried about living people suing about certain portrayals (factual portrayals, nothing acrimonious) so cut out certain passages which made the original edition much weaker.

I knew a bit about Emily Hahn before I encountered this book, from a few of her books about China. But I had no idea that she was such an engaging (and funny!) writer.

Hahn traveled in 1931 to what is now Congo (and what was then the end of the Belgian occupation of the country) and she writes about her experiences there, a single female traveler, encountering the locals in a clinic where she assisted a doctor for several months. She is very much a woman of her time in many ways though she is also quite modern in other ways.

The difficulty in reading this comes with the knowledge that the Congo is actually poorer and less developed than it was 80 years ago, a result of colonial betrayals, corrupt leaders, violent civil war, and general government incompetence (despite being wealthy in resources). It's a terribly sad tale, what happens after 1931.

But here is one of the joys of reading: in our violent-saturated, "Africa the basket-case" media worlds that forego complexity and humanity for overly simple (or total lack of) analysis, it takes a book like this to make the Congo (for me, who's never made it to Africa so far) come alive: its rivers and jungles, its children, its wildlife, its struggles, its humour.

It's been a while since I came across a book I was so engaged in. I have no idea how (or even if) this book distinguishes itself in terms of something "new" (it's not really clear what was cut out of the earlier edition) but it's lovely to just have the opportunity to discover a new writer, a writer who has largely been forgotten. And to hear her in her own words.