I love it when you pick up a book and read the entire thing in one sitting or one short period. Yesterday I was feeling a bit under the weather so I opened up Alison Pick's novel Far to Go at about 8am, started reading it on the sofa and finished it last night at 11.30. It was excellent! Set in Czechoslovakia of the 1930s, the novel tells the story of the Bauer family and the upheavel that Hitler and the Anschluss caused them and their entire nation. Told mainly from the perspective of Marta, the Czech maid, the book is tragic, haunting and memorable. The final scenes, set in Montreal, give the book a real tangible sense of reality for me, given that the Holocaust and 1930s Europe seems so far removed from life today... 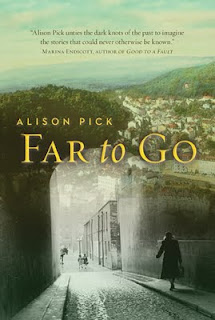 I'm not sure if the tone will be interred in my memory exactly in the way it should be though: in between reading, I talked on the phone and got distracted for a few hours by a collection of David Sedaris stories (my mom was telling me about reading one of his stories on a plane and how she had to put it away because she was laughing so hard, she had tears coming out of her eyes and people were starting to look at her nervously), so intermixed with this uber-serious tale of wartime atrocities and tragedy were snippets of Sedaris' hilarious renderings of his life in France with Hugh, buying marijuana in North Carolina, and losing a throat lozenge on a fellow-passenger's clothing during a flight and his attempts to recover it without being discovered.
Posted by Gregory McCormick at 6/02/2011 01:46:00 PM