She didn't write much in her short and troubled life, but what she did write still seems fresh and fascinating nearly 70 years after it was published. Married to Paul Bowles (another one of my favorite writers), they had and at times distant, loving, drinking and very tumultuous relationship.

After publishing her most famous (one of her only published works, in fact), Two Serious Ladies in 1943, she and Paul Bowles traveled the world: Sri Lanka, Latin America, France and finally, Tangiers. At the age of 40, she suffered a serious stroke which left her incapacitated and she was institutionalized for the next 15 years. She passed away at the same institution in 1973, aged just 56. Her husband continued living in Tangier until his death in 1999 (aged 90).

Her most famous work has a memorable and solid opening three paragraphs:

Christina Goering's father was an American industrialist of German parentage and her mother was a New York lady of a very distinguished family. Christina spent the first half of her life in a very beautiful house (not more than an hour from the city) which she had inherited from her mother. It was in this house that she had been brought up as a child with her sister Sophie.
As a child, Christina had been very much disliked by other children. She had never suffered particularly because of this, having led, even at a very early age, an active inner life that curtailed her observation of whatever went on around her, to such a degree that she never picked up the mannerisms then in vogue, and at the age of ten was called old-fashioned by other little girls. Even then she wore the look of certain fanatics who think of themselves as leaders without once having gained the respect of a single human being.
Christina was troubled horribly by ideas which never would have occurred to her companions, and at the same time took for granted a position in society which any other child would have found unbearable. Every now and then a schoolmate would take pity on her and try to spend some time with her, but far from being grateful for this, Christina would instead try her best to convert her new friend to the cult of whatever she believed in at the time.

What strikes me about this opening passage (I've read these three paragraphs probably fifty times in my life) is the tone and playful use of language which is ironically old-fashioned, as if the writer herself is mimicking how Christina, her character, might have spoken. Yet it's also deadly serious, as well, and Bowles is very deliberate in her use of this tone and its effect on her reader. But more than all that: one just gets such a strong sense of Bowles' protagonist from this opening passage. 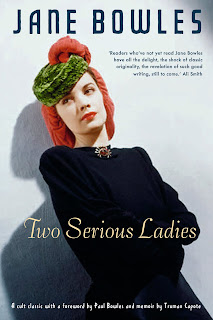