A Tribute to Phyllis Lambert

Phyllis Lambert is a Montreal powerhouse. Born here, she studied architecture at Yale and had her hand in the building of the Seagram Building on Park Avenue in New York. Lambert herself selected Mies van der Rohe and Philip Johnson as the architects and was instrumental in getting Mark Rothko to create the mammoth installation which was part of the lobby's construction. 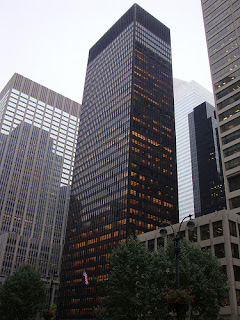 The building has often been called one the 20th century's most iconic and innovative structures. Novel at the time, the building was constructed slightly off the street which allowed a large public space to be opened up and filled with sculpture, benches, fountains. It was a very democratic milestone for urban architecture, making a private building part of the public space, the public consciousness. It has been widely mimicked since.

Yesterday's New York Times has a piece about the building and about Phyllis Lambert's new book (Yale University Press), Building Seagram, which talks about the launch of the book.

And what a beautiful book: it tells the story of the construction of the Seagram Building (with all kinds of fascinating anecdotes about Picasso, Philip Johnson, Brancusi, and Mark Rothko). One constant is Lambert's strong personality: her challenge to her father, Samuel Bronfman (she rejected all his ideas on what should be built on the site with a letter that started, "NO NO NO NO NO NO!" Later Bronfman invited her to New York, from where she'd been living in Paris, to advise on the project.), and the process by which Lambert was instrumental in choosing Mies from a pool of some of the most famous architects of his day.

Canadians love these kinds of stories, make no mistake: local girl/guy makes it big in New 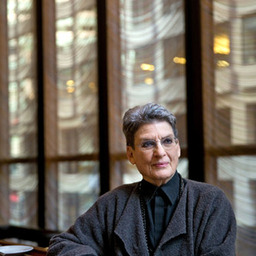 York (or London or Paris) and now we must pay attention to them. But in Phyllis Lambert's case, this really is a big deal: the book, her story, her role in building one of the most famous and influential buildings in 20th century architecture. She really is a major figure and our city should be proud to call her one of our native daughters...

All this to say that it's a rare treat we'll have to hear Phyllis in person at a 2013 Festival event, A Tribute to Phyllis Lambert. Eleanor Wachtel will be there. Deni Bechard will be there. Many important notables, architects, writers, artists, Montrealers, New York-a-philes and assorted groupies - all there to celebrate the book's publication, to hear Phyllis read from it, to hear hilarious anecdotes about one of the coolest cities in the world, to make a toast in her honor.

A Tribute to Phyllis Lambert, in our official closing Festival event on Sunday, April 28 at 5pm at Hotel 10, 10 Sherbrooke Street West in Montreal. Click here and then click on the ticket price to get tickets (you'll be redirected to the website of La Vitrine). Tickets are $10!