This kerfuffle going on with Gary Shteyngart and Canadian writing has me mildly bemused this morning. Apparently, in an interview, the author of Super Sad True Love Story (who was, in fact, just interviewed on Fresh Air the other day), said that while moderating a Canadian prize jury, we was struck with how many submissions there were (he said "millions") and how only 4-5 were any good.

This, he suggests, could be the result of so many Canadian writers getting grants, the implication being that writers are reluctant to challenge grant bodies or do anything experimental. 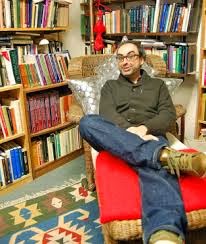 I must say that I tend to agree with him in part. I've said before that I'm often struck with how staid Canadian writing often is. That's not to say that there isn't good stuff being done, there certainly is. And "challenging" writing is only one aspect of writing that he seems to be talking about. Challenging form is no ticket to originality nor does it necessarily equal "good" writing. But to me it's not an issue involving Canadian writers per se. It's an issue with the Canadian media who tend to laud, award prizes to, and buzz about books that are rather fair to middling. Canadian readers or those supposedly "in the know" seem to not like books that challenge form or that step outside of the safe world we often live in. I'm speaking in very general terms here, of course.

I can think of many Canadian writers who do fascinating work that rocks the boat somewhat, that takes chances, that doesn't just regurgitate the same story over and over. But these writers tend to get ignored by the literary establishment in Canada. These works aren't nominated for prizes, aren't written up in the journals or magazines for review, aren't selected as Canada Reads finalists.

Again, not to denigrate any of the organizations or prizes or systems because the final point that I'd like to make is that while I agree with Shteyngart on his assessment of Canadian writing, I don't agree with him on the overriding suggestion that grants equal "middling" writing. Everything that I've said above I'd say equally about American writing. Or British writing. Perhaps even much of the writing from France. The fact is that most writers do decent work but it takes a very special kind of writer to do something extraordinary, no matter what country he or she is writing in. And one of the best things about granting bodies is that while it's true that they do look for a certain "kind" of writer, there is no editorial interference whatsoever (either before, during, or after the project is done).

Writing is hard. Writing well is hard. Writing consistently solid work is very hard. So it's no surprise that most writers hit the middle in terms of quality. Very few can rise to the top (I'm not referring to anything like book sales, bestseller lists, etc. here, though perhaps the same paradigm could be applied to that as well).

What amuses me about this whole episode is the reaction of some Canadians. Geez, people, get thicker skin. Holding up Alice Munro has some example that there are, indeed, "good" Canadian writers just seem childish and petty. Who cares what Americans think of Canadian writing anyway? Who CARES?!
Posted by Gregory McCormick at 1/10/2014 09:18:00 AM