The Future of Cookbooks ...

I still have several big cookbooks that I use regularly. That said, I also have several cookbooks that I have but rarely use when I cook -  mainly they are used as reading material. Julia Child's Mastering the Art of French Cooking is one such book. It's not that I don't find some great recipes I'd like to try in there but there is so much text and 'setup' before each recipe, I get distracted by it (and by Julia Child's highly readable writing) and end up sitting at my table just reading.

For cooking, I prefer colorful coobooks with big photos of what I'm attempting. I also tend to like seasonal cookbooks, too (like this one), so that I can buy ingredients I know markets will have and make dishes which are in season.

I also find that I use my netbook for cooking a good deal, too, mainly for specific recipes or for times when I have lots of ingredients but no idea how to put them all together. I use two sites regularly one which is more practical and one which is full of great photos and is more a reading site than a cooking one (at least for me). 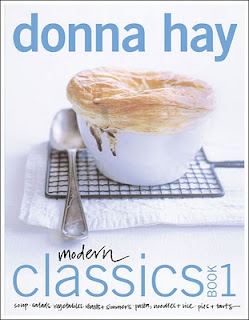 This book is a rare one which I both use in my kitchen and love to read and look through like an art book.

A few times I've been over at someone's house and noticed that we have the same cookbook and we end up sharing notes, talking about recipes we like, ones we've tried but didn't like, and our general impression of the book. Almost like one would discuss literature.

But cooking at home is at a very strange point in development. People "cook" less and less and rely more on processed powders and concoctions that need very little preparation. This is certainly understandable given the time contraints we all live under now. Consumption of fresh fruits and vegetables is down. But people are still fascinated by cookbooks and thousands (probably tens of thousands) are published each year. Is it a kind of nostalgia?

I really wish I could be at the Paris Cookbook Fair this year and listen to the discussion underway about the future and the current place of the cookbook in the home.
Posted by Gregory McCormick at 3/08/2011 08:33:00 AM