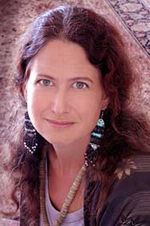 One of the most influential poets writing today, Jane Hirshfield`s work continues to inspire me. I like the seeming simplicity of her work, how compact her poems are but how they all stand up to multiple readings.

Her poems almost always start with a very tangible object:

What interests me about a poem like this is how straightforward it is on the surface (what could be simpler about melons in a field) but how she actually captures a rather complex series of ideas: that people are both as simple and natural and straightforward as melons growing under the sun, but also as hard to get at as a painting hidden under another painting.

In this way, the poem itself is a metaphor for humanity, it`s simple and hard to work out at the same time.

Her work almost always starts with an object: a window, a bowl of soup, a woodpecker on a ledge, but then she moves through this object, expands it, looks at it as both a rhetorical door and a symbol for what is good and bad about all of us. But though these ideas are all captured in her poems, her work is never pretentious or pedantic.

Also a translator and essayist (her 1998 book, Nine Gates: Entering the Mind of Poetry contains some excellent essays about why poetry still matters), Jane Hirshfield will be at the Montreal Zen Poetry Festival next week.
Posted by Gregory McCormick at 3/04/2011 08:05:00 AM