When writer Joseph Roth was dying in Hopital Necker in Paris in 1939, none of his nurses or doctors knew that he was perhaps one of the 20th century's best writers. To them he was just another poverty-stricken drunk with the tremors and an incoherent babble. But in the space of just over half his life (he was 44 when he died), he had written more than a dozen novels and hundreds of journalistic pieces for some of the best newspapers in Europe. For a time he was the highest paid journalist working in Europe. He predicted the rise of Hitler as far back as 1922 and knew in his bones that it would end badly. When Hitler was appointed chancellor, he left Germany for good and settled (off and on) in Paris. This was a challenge in terms of his writing career and money was always a problem for Roth. 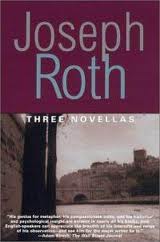 His last story "The Legend of the Holy Drinker" , published in Three Novellas, captures the struggle that Roth was experiencing in his last few weeks of life. It's a stunning achievement, I think, and captures both the spirit of the secular city man of the early 20th century and the religious nature and superstition he can't quite let go of. The story is tragic, wry, ironic and hilarious. It features dishonest women, a famous football star, a Polish chancer, lots of waiters and little St-Therese, the one action the protagonist can't quite complete. It's one of those rare stories that as soon as I finished, I flipped back and re-read the entire thing again.

One thing has struck me since I started re-reading Joseph Roth: in every single bookstore I've been inside in North America, the shelves are full of Philip Roth but none has had a single work by Joseph. His books include The Radetsky March, Job, The Anti-Christ, What I Saw, and many others. He lamented for a past that would never be again: for the fall of the Hapsburg Empire when he suddenly found himself a subject of Poland, a newly created country which was cobbled together from the rubble of a collapsing Europe; for his mentally ill wife who was institutionalized in Vienna (and would later be "euthanized" by Hitler's henchmen as many mentally ill people were); for a future that he knew he would never live to see.