Jenny Erpenbeck's novel Visitation is one of the more interesting books I've read lately. It's unusual in form and tone, telling the story of a small country house on a lake near Berlin. The home is the only consistent character in the book and we hear about its Jewish owners forced to leave as WWII grips Germany, we hear about the architect who buys the home (at a cut-rate price in the chaos) from the Jewish family, we hear about the gardener who plans each square foot of the grounds meticulously, and we hear from several other key people as the story of the house and its occupants unfold. In the end, it's a history of Germany, of Europe, but on a micro-individual level. 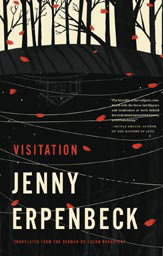 It's a dark novel in most ways, but the writing is simply gorgeous. Everything seems one stepped removed from the dramatic tension we come to expect in a novel, particularly a novel which explores the dark side of history, but the story isn't moved forward by confrontation or painful scenes.

At certain points the novel seems more like a collection of short-stories, even essays, with titles like "The Wealthy Farmer and His Four Daughters," which catalogues a list of superstitions associated with marriage and young women seeking a husband.

I love history and books on history but one question that always nags at me when I read history is how this war or that calamity affected the individual lives of those involved: not the men in back rooms, smoking cigars and being chauffered around, but the average urban worker, the farmer, the migrant, the teacher. Visitation takes this notion and delves deep into how the outside forces of history invade the "average" person's life in personal and individual (and almost non-political) ways.

It feels like an important book and though I know little about Erpenbeck's story (she was born in East Berlin in 1967) or other work, she is definitely on my radar now with this lovely little novel.
Posted by Gregory McCormick at 10/29/2012 08:03:00 AM