Yes, there are lots of great movies set in New York but when I daydream about taking a weekend away, it's always a New York movie I want to see. Here are four of my favorite films set in New York: 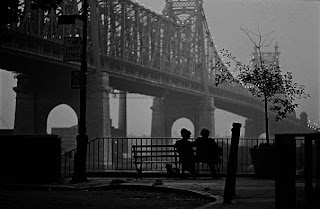 Of course, Woody Allen's masterpiece, shot in black and white and starring Diane Keaton, Mariel Hemingway, Meryl Streep and others. This is a movie I know long sections of almost by heart: that opening scene with the saxophone playing and Woody Allen's voiceover trying to get it right, the repartee with his ex-wife (who leaves him for another woman) and the amazing acting of a very young Hemingway who is uber-convincing as a highly intelligent yet still emotionally her age woman in love with the Allen character. Some gorgeous B&W shots of the Brooklyn Bridge and the streets of NYC.

Moonstruck
I haven't seen this movie in a long time but I love the images it still conjures up: Cher walking home in the early morning (what people of my generation called The Walk of Shame), her father sitting in his easy chair always listening to Vicki Carr, Olympia Dukakis as the mother. Great film. 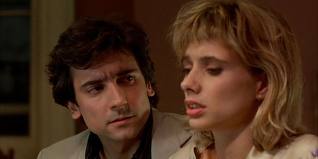 This was one of my favorite movies when I was in my 20s. Griffin Dunne (why did he never become a star) just trying to get home through the (rough) streets of New York. He tries to romance Roseanne Arquette (who lives with a sculptor though her entire life and character are just bizarre) but soon he realizes that's going nowhere and leaves. Through a series of misadventures, he loses all his money and is forced to make his way home on foot. Along the way he meets Teri Garr (who's hilarious as a waitress who hates her job) and is mistaken for a burglar and almost done in by a crazed mob. It's a hilarious film directed by Martin Scorsese.

Rear Window
Though there is nothing uniquely New York about it in some ways (you can tell it was filmed completely in a studio), the hardscrabble life of Nicky's neighbors and the glamour of Lisa (Grace Kelley) do seem uniquely New York.