Spanish writer Javier Marías: is one of those writers whose name I've known for years but I've never had the occasion to read his work until last week when I read The Infatuations. Wow, I was really blown away. 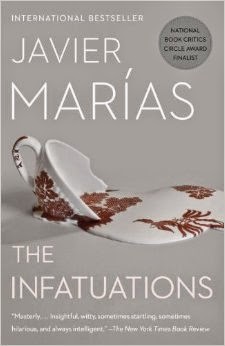 The novel has a fairly simple premise: a woman sees a couple at a cafe regularly, imagining their lives, noticing them, considering them a dream couple. But when the man is murdered under bizarre circumstances, she befriends the wife and a kind of intellectual murder mystery commences.

It's not your typical kind of murder mystery but it's very entertaining, cerebral, and with long flowing sentences that you have to read and re-read since they are so densely packed.

Along the way, I was at times reminded of Joan Didion's treatise on grief, The Year of Magical Thinking. Yes, they are very different works (Didion's is not fictional) but they both look at grief from a stripped down point of view, not glamourized or romanticized. But Marías' work delves into the process as an outsider on the perimeters of grief of pain.

I read this over a few nights on the sofa as Christmas music played in the background and rain poured down outside, melting all the early snow we've had this year.

It makes me very interested in getting my hands on some of his other works.