Slow time of year: still lots going on at the office but nothing urgent for the most part, which means we are all taking time to read, file reports, have meetings to brainstorm and all the other things we do in between Festivals.

Been reading a fair amount this June so far: an excellent biography of former Czech leader and dissident and playwright, Vaclav Havel. 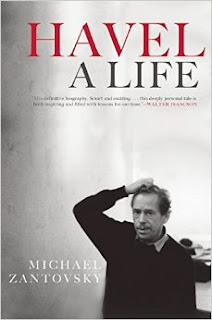 When I was younger, I went through a phase where I was crazy about Czech writers: Milan Kundera and Jiri Weil and Havel and many others. Not all of these writers appeal to me in the same way now, of course, but I have enjoyed re-acquainting myself with some of their works.

But Havel's biography by his friend Michael Zantovsky was a good read. He tells us early on that it's a tricky task to write "the" biography of someone who is a good friend but though the book is hardly critical in any serious fashion, it does give us an interesting vision of who Havel was as an artist, less so as a man.

The book contextualizes Czech art and especially writing through the 60s and into the 80s and also detailed the breakup of Czechoslovakia with details I have long wondered about. Vaclav, who died in 2011, was a writer whose work I encountered (for some bizarre reason) as a young man when I worked hard to get my hands on every play he wrote that had been translated into English. His plays aren't to everyone's taste: they are absurdist and often allegorical, but they appealed to the romantic notions I had back then about writers struggling to create in an oppressive regime. When Havel was elected as President to Czechoslovakia I remember feeling so happy that I knew who he was and knew his work.

After this very interesting biography, I then turned to Milan Kundera (who has a new book out this summer) and re-read The Unbearable Lightness of Being, a book I loved in my early 20s but that I haven't thought about in a long time. I didn't like it nearly as much as when I was younger, but I did find it an interesting experience to go through the story again, much of which I'd forgotten. It was too esoteric, too many bold and sound-byte statements that if you actually break them down, were silly and even trite. ("A single metaphor can give birth to love."). Still, it was a nice nostalgic project...

Since I moved a few weeks ago, I will have to dig out some of my other old books by Czech writers, Ivan Klima, Jiri Weil, etc. and encounter their works again after many years.