I saw that Eleanor Wachtel interviewed Valeria Luiselli on Writers & Company the other day and was very happy to see her there on Eleanor's show. I've been raving about Luiselli's books for some time and I'm always thrilled when other people admire writers that I like.

I happen to be reading The Story of my Teeth right now which is one of the funniest books I've read in a long time. Yet funny as it, make no mistake, Luiselli is a serious writer and her books are gems. 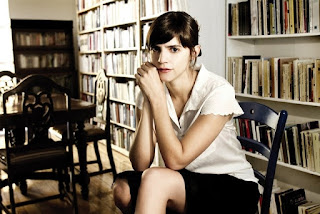 I wrote about Luiselli before when I read her book last year called Faces in the Crowd (an excellent novel) and I firmly believe that Luiselli has an amazing career ahead of her.

Faces in the Crowd tells the story of a young mother in Mexico City with a young child, thinking back on her time in New York when she worked at a publishing house. She becomes obsessed with a poet, a Mexican poet, living in New York in the early 20th century, and the book moves around in time and perspective. It's haunting and moving. I even passed a French translation around to a few friends and they adored it in French, too.

An earlier work, which I've haven't read though it's been on my list for a while, is a collection of essays about city life, Sidewalks, which Luiselli wrote in her twenties, a work that Cees Noteboom raved about:

"The tone of her writing is that of the flaneur and philosopher as the rhythm of "the walk" (or the bike as Luiselli explores the topic of public transportation in Mexico City in one passage) involves thinking about architecture as well as people, gaps in the city, reflections against asphalt and what remains in the background. Luiselli at the same time allies her writing with European thinkers such as Benjamin, Kracauer and Baudelaire, yet she keeps her Mexican accent all the while."

Her latest work, The Story of My Teeth, tells the story of a rough and tumble upstart and how he
came to collect the teeth of famous people. I'm only about a 1/3 of the way through it but I find myself laughing outloud while reading it, something I don't do often. 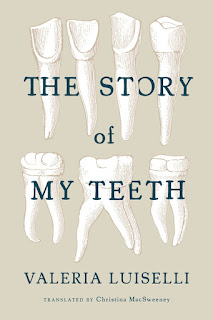