The Cult of J.T. Leroy

As part of Festival Letteratura, I saw this film on Saturday, about the writer J.T. Leroy. Interesting story. The writer was the darling of the New York/San Francisco literary circuit, coming out of obscurity when he released a novel detailing his life growing up in an abusive home and his own struggle with drugs and prostitution.

When Sarah was released in 1999, many big name writers praised it (Mary Gaitskill, etc.) and because Leroy was painfully shy, celebrities came forward and did many of his readings in public. Suddenly, he was everywhere: Paris Review, New York Times, Vanity Fair.

I don't think I'm giving too much away when I write that it was a big hoax and many big names were sucked into it: Sandra Bernhard, Rosario Dawson, Ben Foster among many, many others including literary big names like Dennis Cooper & Sharon Olds (one of the guys implicated in the hoax: "The celebrity part was easy: once you had one or two celebrities involved, all the others wanted to be involved, too."). It was all a big fabrication, all the abuse, the entire persona of J.T. Leroy was a fiction (it was played on the phone by one woman and in person by another woman). 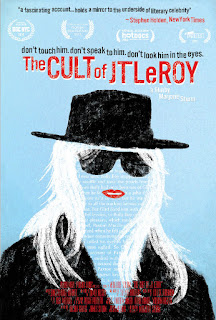 This isn't a terribly big shock when it comes along in the film. But then the film takes an interesting turn, raising many questions: most people are furious about this woman, Laura Albert, who perpetrated and orchestrated it. People call her evil, almost like a cult leader, severely mentally ill, etc. Others are more sympathetic, suggesting that a 30-something woman has a hard time getting attention for her work, her writing, and she worked the system in a way that brought attention to her work and forced people to pay attention.

In any case, it's a very interesting film and one that raises all kinds of questions about what we expect from writers: is it their story that is part and parcel of why we like their work? Or is it the work and only the work that should be part of the mix? I think about this a lot since we are living in a day and age when the writer's biography is seen as so important to the creation of their work: we are fascinated by writers with painful histories, who suffer abuse, mental illness, drug abuse, and any writer who claims to have lived a model life without any major traumas dooms herself to obscurity (maybe I'm overstating this slightly but only slightly).

But why shouldn't a writer's work be the only thing that matters? Whether it's real, whether it's true, isn't that really irrelevant (if one calls oneself a fiction writer that is: it's different for a journalist or someone who is writing a non-fiction memoir). Shouldn't the work just be the thing?

I really recommend this film which will be one of the headlining films at Montreal's International Documentary Festival in November.
Posted by Gregory McCormick at 9/13/2015 06:41:00 AM

Email ThisBlogThis!Share to TwitterShare to FacebookShare to Pinterest
Labels: J.T. Leroy, Montreal International Documentary Festival, the cult of the author