I've long been a fan of Yoko Ogawa: her book, The Housekeeper and the Professor is very odd but very intriguing  (and made into a movie in Japan in 2006). She is a master of creating macabre, almost metaphysical settings where things are never what they appear to be with characters stubbornly refusing to understand their actions or motivations.

I've been reading her book Revenge and I was so entranced with the worlds that she creates that after I read it, I flipped around and read it again, something I don't do too often. (Check out NPR link here and ignore the references to Murakami: Ogawa has little to do with him in terms of theme, subject or mood and the only connection is that they are both Japanese).

This a novel only in the loosest sense: more like a collection of stories that are all highly linked. From stories of murdering landladies to a nostalgic memory of a long-lost stepmother, from a mysterious hotel guest and a car crash with thousands of tomatoes scattered across a road to a murdered surgeon who's carrying on an adulterous affair with a co-worker, the stories are creepy, freaky and very unique.

Reading this collection I am reminded of the odd tales of Horacio Quiroga who was also a master of macabre.

Ogawa is one of Japan's most translated contemporary writers. The other novel I've written about in the past, Hotel Iris, is a book that stays with you. Even years later, I still remember so many specifics about it: the young girl befriending a translator, becoming his sexual slave with disastrous results. All kinds of allusions to Greek tragedy and the middle world between reality and the supernatural.

This collection is one I have really appreciated reading and anyone who likes the macabre, scary or generally creepy, should check it out. 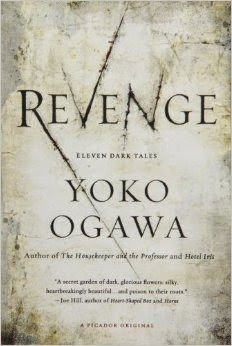