A bit behind the game here because I've had a very busy week at work, but I wanted to write about some of this year's Giller picks which I am very happy to see on the list.

The first one today is Anakana Schofield's book Martin John which is one of the most innovative works I've read recently. Residing in the head of a mentally troubled young man living in London, we see a crisis and breakdown from the inside. It's written generally in the third person, almost as if Martin John himself is a character that he has created to narrate his own life. Yet then there are moments that are either Martin John's mother's thoughts or the thoughts that he imagines for her. This delicious ambiguity keeps one guessing, keeps one engaged in the repeated cycles, phrases, things Martin John hates and fears. This narrative play in many ways gets at the heart of what narration is and means, as well as exploring the divided nature of writing. What Schofield captures so well is this sense of what it feels like to live in the head of someone struggling with a mental illness, a sexual deviant, a very troubled man. There's fear. There are all these moments of asides that seem to circle in on themselves.

He did it. He did not do it. He could have done it. She made it up. Except there was more than one she now. Rumours and warnings were not evidence.

She worries how it would affect all his sisters.
If he had sisters.
She worried if he got out or they came home now how could they be married in the church. She worried about the sisters he didn't have.
She worried he had done it. She began to believe he had.
She had seen enough to confirm it.


Here we see Martin John's mother agonizing over a specific moment, reflecting on the crime that Martin John may have committed. We hear the pain and helplessness, yet we also sense a bit of the mental unraveling here that we have been accustomed to inside the head of Martin John. Is his mental instability genetic?

But what she manages to pull off is doing this without a sense of foreboding, at least not from what will happen as the story progresses. There is no foreshadowing, no clumsy narrative technique, almost no acknowledgement of many standard novelistic techniques (constraints?).

It's a fascinating work which raises so many questions about the limited perceptions we have of other people's struggles, even those who are very close to us. It's also hilarious in sections that I had to read and re-read paragraphs because I found them so unnerving and also so funny. 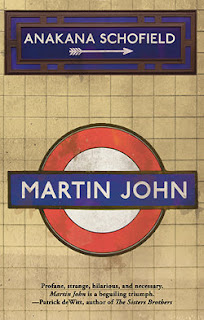 I am very pleased to see Martin John on the list of the Giller Prize. My big gripe with the Giller Prize is how "safe" all their choices are, how little Giller works experiment or push the boundaries of genre or form. There's also a sense that they are all written for urban middle-class "old stock" Canadians and it's very encouraging to see a work on this list which challenges that. This is not your grandmother's Giller short-list.

Incidentally, Martin John, Schofield's second novel, was the name of a character in Malarky, Schofield's first novel (which won the Amazon.ca First Novel Award), and in a footnote there, she suggests we see the novel Martin John. Yet the work, the novel, wasn't real (at the time). It was an imagined reference in a real novel. But the creation of Martin John the novel changes Malarky. I honestly didn't read Malarky until after I read Martin John but I imagine for those who liked Malarky, the novel Martin John may well change the nature of the earlier novel. I positively relish these kinds of asides, these fascinating times when works talk to one another.

There are so many other issues the novel raises: the male gaze, female vs. male power in public and private, motherhood.

I'm not predicting this novel will win (I'd be thrilled, though, and it certainly would be a coup for a major literary prize of Canada), but I am so encouraged at what this means for Canadian fiction in general, how mature it's becoming and those old days of self-gazing identity novels are long dead.

Just a note that Anakana Schofield will be in Ottawa soon for the Ottawa Writers Festival on Saturday, October 24 in the evening. Check out the entire OWF website for their entire fall lineup which looks great!
Posted by Gregory McCormick at 10/09/2015 08:38:00 AM