On Tomas Venclova and Vilnius

I've long been reading Lithuanian writer, Tomas Venclova, and his collection of essays, Forms of Hope, I've returned to again and again over the years.

I read over the weekend his book Vilnius: a Personal History which, again, I found very easy to read and engaging. Not very aptly named, though, the book is light on personal details or history and very much an objective look at the history of Venclova's native city from its founding, through the Middle Ages, the Renaissance and beyond...

I first discovered Venclova through the work of another writer I admire, Czeslaw Milosz, and their letter exchanges on the city of Vilnius make up the last section of this book (and other books by Venclova and even in some of Milosz own work).

I spent a week in Vilnius years and years ago and found it one of the most interesting and beautiful cities I've ever visited. My trip there cemented my love of Milosz (who also spent many years there as a young man) but also led me to other literary discoveries. 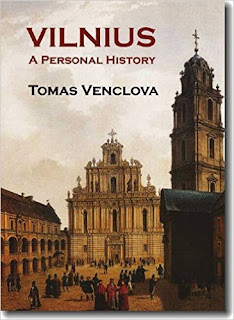 The city of Vilnius is interesting because of its long history as a centre of cosmopolitan culture, learning and language. For years it was nearly made up of half Jewish residents, the other half being largely Polish-speaking and Belorussians. Lithuanian speakers made up just a fraction of the population for much of the 19th and 20th centuries (at least until the middle part of the 20th century) though this changed when the Soviet Union annexed the republic and absorbed it into the USSR. Almost 95% of the Jews of Vilinius perished at the hands of the Nazis during WWII and the few remaining were shipped off to Siberia under Stalin.

These vicissitudes of history also meant that the linguistic situation flip-flopped: from a primarily Yiddish and Polish-speaking city in the early part of the 20th century to a mainly Lithuanian-speaking population today. The city has long served as an antidote to the idea that language must determine nationalistic temperatures (many Poles consider themselves Lithuanian and the Jews largely did too). As has been pointed out by many historians, the notion that language somehow determines nationality is a relatively recent notion and for much of the 17th, 18th and 19th centuries, there was absolutely no contradiction in a state being a motly collection of all kinds of languages and ethnic groups. Lithuania generally and Vilnius particularly was an interesting symbol for that almost anachronistic idea (though nationalism in general is largely passe in most Western democracies).

Venclova explores all this and more, giving his reading a moving and more than passing glance of this city which has seen so much horror and oppression. Largely forgotten now, Vilnius exists at the edge of Western democracy (it's an EU member now), just a stone's thrown from Belarus (practically a dictatorship) and, of course, Russia. Lithuanians watch with alarm at Russia's growing dominance and assertion of power and more than one politician and intellectual saw portentous signs when Russia annexed Crimea. The West doesn't have a good track record in coming to the aid of small nations when faced with the might of a big (if corrupt) power like Russia.

Venclova, long a Slavic Literature professor at Yale, is one of Central Europe's most respected poets and it's a shame that he is so little known outside of that region, given how incredibly famous he is in the Baltics, Poland and even Germany. His collection, Winter Dialogue, is another favorite book that I take down and disappear into several times a year.