So since I've been on an international crime writing fix lately, I couldn't read far without encountering the work of Miyake Miyube. I've read one of her earlier works but this weekend I picked up the 2005 translation of her 1995 novel (originally published in Japanese), Crossfire.

Despite the pop-fiction cover and title, the work is complex and gripping. I started reading it yesterday afternoon and haven't been able to put it down. It chronicles a young woman with the power to start fire and it's the story of her killing spree (she only kills criminals) as she is chased down by a female Japanese detective, one of the only women on the Japanese police force. 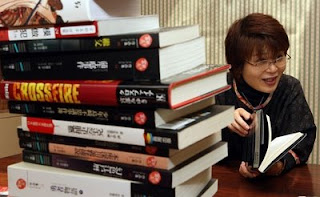 It's like Dexter meets Firestarter meets the dark seedy side of Tokyo life.

And that's one thing I appreciate about Miyube's writings: they show a side of Japan rarely seen in fiction or TV or even movies: the underbelly of small time criminals and others who fall through the cracks. I recently read another Japanese noir writer, Natsuo Kirino's Real World which I am much less enthusiastic about. Where Kirino focuses on a small band of nihilistic (and rather superficial) high-schoolers, Miyabe is much more interested in Japanese society as a whole, as well as in what it means to seek vengeance, what is a "justifiable" murder, and how being a woman in Japan is both an advantage and a disadvantage.

Miyabe is a prolific writer and has written many novels and stories though only a handful have been translated into other languages. Born in 1960, she was trained as a mathemetician and taught for many years before devoting her life to writing. She's written in a number of genres including criticism, science fiction, and she's even written a children's book. 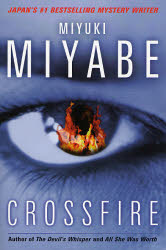