This takes place in another time, he lands here, his face still congested
by the blue sky that sucked him out of hell and made him regret, for
a moment, the sweet herbs and the women of his country. But some
things are not forgotten long, a bloodied garden, a street ringing with
the hobnailed boots of destiny. For one whole night the bullet-riddled
houses prayed in silence and in the morning there was the black smoke
of identification papers and family records, while in the distance, tail
to the wind, an orphaned donkey brayed, stranger to the lamentations
of the women trying to mend the puzzles of the shirts and vainly
smoothing their sons' hair. So much cold light welcomes this fugitive
to the air terminal that it sticks to his skin and chills and frightens
him, as if a world that washes its wounds it cannot know had something
of the monster or the tyrant -- and even as he washes his hands in the
spray of disinfectants, he's still thinking: white, white, glacial purity,
chasm where whirlpools of blood are lost, where misfortune itself is
sluiced down the drain -- and what can the colour of the earth here
be?

-- from Mirabel by Pierre Nepveu (translated by Judith Cowan) 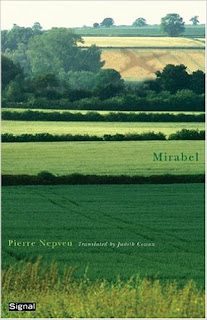