One of the greatest things about going to literary Festivals is having the chance to become reacquainted with writers whose work I used to know and read. Yesterday, I saw British writer Hanif Kureishi on stage and the conversation started around his early work (a screenplay in this case), My Beautiful Laundrette. I was so crazy about Kureishi when I was in my early and late 20s. The entire world he created was a new one to me: contemporary London, Pakistani migrants, skinheads. It was a movie I saw several times with various groups of friends. 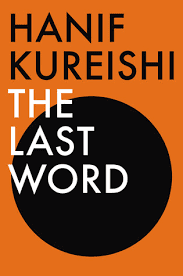 The conversation yesterday centred around this early work and not much else was said about his later work (a little about his excellent novel The Buddha of Suburbia) but not a single thing was said about his new book, The Last Word. Odd to invite a writer halfway across the world and talk only about his career from 20-25 years ago.

Still it was good to hear him talk about the screenplay and a bit about Buddha. I also found that the details about the reception the film had was interesting: because there are themes of homosexuality in the book and the two protagonists share a kiss, the film was picketed in New York when it opened in 1985. His last book seemed to get very little buzz (I heard nothing about it until I googled him and looked up his recent work on Amazon).

Kureishi is in a unusual position in many ways: he's quite famous in the writing and literary scene but people rarely talk about his work except Laundrette and Buddha (maybe inside the UK it's different). And he's a good writer. The thought occurred to vis a vis a recent post: how do writers like Kureishi make money? He talked about his house in London, etc., which clearly means he has somehow managed to do OK though it's not clear if his money has come from his writing or somewhere else (his family, etc.). He teaches creative writing, sure, but owning a house in London?

Not that it matters but the thought does occur to me frequently since it is so hard to make money from writing nowadays. And when I hear about writers who live in Manhattan (even Brooklyn to some extent), London, Paris or Vancouver, I wonder: how on earth do they survive?!

Kureishi mentioned this in passing, how London was a city of the very rich and the very poor. That practically no middle class people live there. And this is my sense of New York, as well, especially Manhattan. How that must change your perception of life, of traveling, of immigration, of a working life. If everyone you know is wealthy and all you see are chains of huge corporations, you have an odd view of the rest of the world perhaps...
Posted by Gregory McCormick at 1/30/2016 08:29:00 AM