Cristina García is one of those writers whose name I've heard many times but whose work I'd never read myself. Since I am in Colombia currently with wonky Internet access and limited English books available, I have been picking through the small corner in the bookshops devoted to English and coming across some odd choices I never would read at home. The other day I discovered this old 1997 novel from García, The Agüero Sisters. 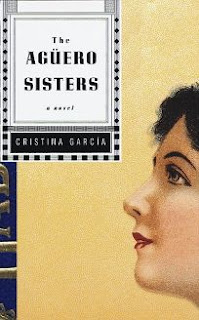 I've read about half of it so far and I'm enjoying it. It tells the story of two Cuban sisters, long estranged, one still living in Cuba, becoming disillusioned with the revolution, the other in Miami, wealthy and terribly unhappy. Both are coming to terms in their own ways with the deaths of their parents and the way that fate determined the circumstances of their lives.

The story is told from multiple perspectives: from each sister, from their children, from their parents. It skips around in time. There's a vague allusion to a plot to overthrow Castro (or at least it's vague so far, the book is set in the early 90s) and it's certainly written from a Cuban exile's perspective (I'm intrigued with how negative portrayals of Cuba often are when written by exiles as opposed to work by Cubans themselves which tend to be more subtle and complex).

What is subtle and complex here, though, is the emotional lives of these characters. The complexities of their memories, of their relationships.  And the writing is gorgeous, colorful, rhythmic, long sections could be read aloud and performed.

I've written before on Cuban writing and how amazing much of it is, but this is a new world for me: the entire world of Cuban exile writers. They tend to be a conservative lot which puts me off a bit, but then again, they know more about the situation in Cuba than I do so I certainly have no right to speak as an expert when my entire relationship with Cuba is through the news and its literature (and the odd movie now and then).
Posted by Gregory McCormick at 2/01/2016 08:47:00 AM