Though we won't officially announce our lineup for another six weeks or so, we are putting the final touches on our 2015 program and it's looking great.

In addition to our 2015 series on Mile End, we have events on First Peoples Writing (and a new prize), a series on Generosity, events about mobility, movement and immigration as part of Performigrations, and a Film Series, as well. And this is just a sneak peak: we have writers confirmed from 15 countries including Germany, Algeria, Israel, the USA, Martinique, Trinidad & Tobago, France, Italy, Mexico and others.

We officially release all our 2015 at a press conference on March 24, 2015 where we'll announce the winners of our prizes: 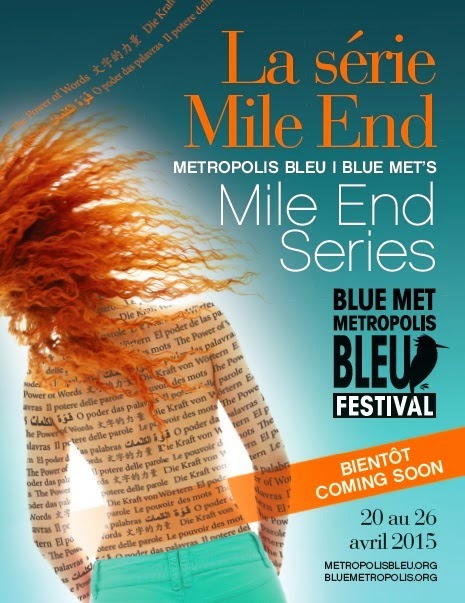 The Blue Metropolis Grand Literary Prize: this is traditionally one of our biggest events and in the past we've given the prize to Richard Ford, Colm Toibin, Joyce Carol Oates, and many others. As in past year, we'll award the prize on-stage at the Grand Bibliotheque on Saturday, April 25 in the afternoon, followed by an interview.

The Premio Metropolis Azul for the third year will be awarded to a very popular and in-demand author who explores some aspect of the Hispanophone world in Spanish, English or French. We're expecting a full house for this event on Thursday, April 23 in the evening. Past winners of this award include Sergio Ramirez and Luis Alberto Urrea. Some names on the short list for this prize in 2015 include Sandra Cisneros, Isabelle Allende, and Luis Carlos Zafón.

Our two new prizes this year are for First Peoples Writing and the Words to Change Prize. The First Peoples Writing Prize will go to an Indigenous Canadian writer of great renowned and the Words to Change Award is a new prize which aims to value work that brings communities together. This year, we're happy to give the prize to an artist whose work is at once funny, moving and historically fascinating.

Blue Met 2015 promises to be one of our biggest and highest-profile Festivals in a few years.