The Problem with Humanitarian Aid

Haiti. Afghanistan. Sierra Leone. Congo. Countries with entire humanitarian aid industries that move in (or moved in many years ago), set up shop, and start doing work. Good work. But when does this good work become counterproductive and alleviate local leaders from their elected (or, indeed, self-appointed) responsibilities? When does this aid make people dependent? When do these aid agencies become tools of repressive, corrupt, or inept regimes? These are questions that writer Linda Polman asks in her book War Games: The Story of Aid and War in Modern Times.

Fresh from an appearance in New York as part of PEN World Voices, Linda Polman will be onstage at Blue Met, talking with Dennis Trudeau about this unholy alliance between NGOs and oppressive governments or militaries. Polman writes:

If aid has become a strategic aspect of warfare, can the claim to neutrality made by humanitarian aid   organizations still be justified? Reduced to a single horrific episode in our own history, this dilemma becomes easier to comprehend. 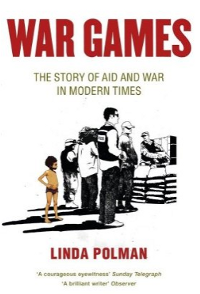 Imagine. It's 1943. You're an international aid worker. The telephone rings. It's the Nazis. You'll be granted permission to deliver aid to the concentration camps, but the camp management will decide how much of it goes to its own staff and how much to the prisoners.


If you conform to the practices of the humanitarian aid industry, you'll deliver the supplies.

The example is meant to be provocative and even histrionic, but Polman's overriding point is quite clear: the "grey" areas into which aid industry leaders often move are veering ever closer to open collusion.

Originally from Holland, Linda Polman has lived in war-torn regions of the world for much of her career.Her 2004 book We Did Nothing takes a critical view of UN failures and weaknesses in war torn regions and was called, "A small classic of man's inhumanity to man" by the Sunday Telegraph.

Polman will be interviewed on stage by former CBC host Dennis Trudeau on Saturday, April 30th at 1pm at the Holiday Inn Select - Centreville. Get your tickets here.
Posted by Gregory McCormick at 4/19/2011 09:49:00 PM