Chad Harbach and the Baseball Novel

I must admit that I am not a huge sports fan. I have been to baseball and basketball games and had a perfectly fine time. When I lived in Seattle back in the 90s, I followed the Mariners and rooted for them at the occasional home game. I have developed an interest in hockey after being in Montreal a number of years, but I've never been much on "the baseball novel" or the sports novel.

Yet last week in Berlin, I found myself anxiously looking forward to seeing American writer, Chad Harbach, author of The Art of Fielding, probably one of the best-reviewed "baseball" novels in a generation or more. 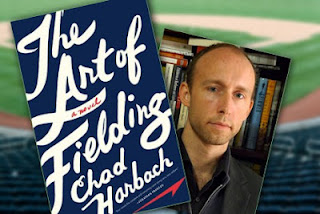 The room was huge and though the attendance could have been better (probably under 150 people were there, in a space meant for four times that number), those lucky enough to attend were, I think, pleasantly surprised at how charming and affable Harbach was on-stage.

Interviewed by Priya Basil, Harbach initially rolled with the contention (Basil's) that the pairing of the book's main themes, sports and homosexuality, was an odd choice. He seemed sincere in explaining how it happened organically throughout the long process (the book took 10 years to write) of developing it.

A young Australian woman told me after the show that she had seen Harbach interviewed in Sydney by a terrible interviewer who seemed woefully unprepared (note to those who want to do interviews or host events: be prepared! We often refuse to use an interviewer again once they give off the appearance of ill-preparedness during a Festival event.). Basil is a good interviewer if she is a bit stiff at times. Her thorough lack of baseball knowledge (she spoke about it as if it were some exotic 19th century sport played by coolies in a desert) was charming though and added humour to her interaction with Harbach.

One aspect of Basil's approach is to tell Harbach what a critic has said about his book (often something off the wall) and then get his reaction. A little of this goes a long way but Basil definitely chose the right quotes to throw at the writer who happily answered in a thoughtful and very intelligent way (the references to Homer were an absolute thrill and so effortless by Harbach). What I really do appreciate about Basil is her thoughtful questions which reflected, I think, a close and thoughtful reading of Harbach's book.

A baseball novel, as I suggested earlier, is not necessarily something that would strike me as my cup of tea, but after listening to the discussion, reading some fascinating reviews (not all glowing, by any means), and hearing Harbach read from the book myself, it's definitely on my must-read list over the next few weeks.
Posted by Gregory McCormick at 9/17/2012 05:48:00 PM