Meena Kandasamy: a poet for today

I'm a big fan of Indian/Tamil poet Meena Kandasamy. I keep up with her Twitter updates and read and re-read her work. 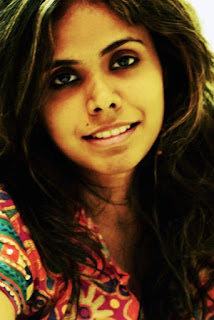 Earlier this year, she got in somewhat of a scrap when she championed her point of view after weighing in on a festival associated with a university in April. Organized by the traditionally "low-caste" Dalits, the festival which featured beef dishes being served, outraged some right-wing Hindu nationalists who threatened violence.

When Kandasamy tweeted her happiness at the ultimate success of the festival, the reaction was violent and fierce, many people making horrific threats against her. As one organization put it:

It appears that Meena Kandasamy has been singled out for abuse at least partly because she is a bold and outspoken woman who expresses her opinion freely in the public sphere. The fact that she is a Dalit, especially one whose work focuses on caste annihilation, linguistic identity and feminism, clearly makes her even more of a target.

It's eerie how universal this impulse is: that radical religious fundamentalists (no matter which variety) use violence or threats of violence to any point of view they deem threatening to their outlook.

Though things seem to have blown over for now, I have been meaning to write about Kandasamy anyway for a while and praise her passionate and powerful poems, her bravery in writing what she wants to write (despite threats and criticism), and her general intelligence and creativity. Some poems feel positively ancient in their reliance on imagism and straightforward language:


I am almost reminded of Tang Dynasty poets, Du Fu or Li Po: bursts of images and colors which stand in for a vague emotional absence. Her book Ms Militancy contains some fascinating poems that reflect and refract the history of her caste and gender but they are highly personal and evocative as well. 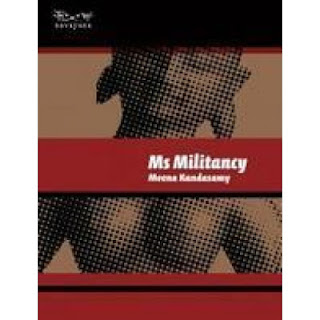 On a highly personal note, when Kandasamy was in Montreal a couple of years ago for the Blue Met, we hopped a train out west and hit Ottawa and then Regina (together with two other writers including the charming and elegant Mr. K. Satchidanandan). I remember hitting a bar in Regina with them, a quiet (and chilly) Tuesday night in downtown Regina, drinking a beer in a gay bar because we were all curious what a gay bar in Regina, Saskatchewan would be like (answer: quiet). It was a nice trip and Meena and Satchi were both very likeable and down to earth.

In all three cities we traveled to, Kandasamy was raved about, people thrilled at her readings, her poems, and her quiet intelligence.
Posted by Gregory McCormick at 12/03/2012 08:10:00 AM