The Last Days of Stefan Zweig

Crazy busy week and no time to blog. In the meantime, been reading two very interesting books. 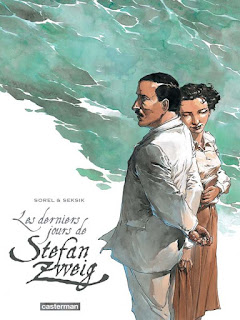 Les derniers jours de Stefan Zweig has some of the most beautiful illustrations that I've seen in a long time. The story, too, is one that hooks the reader almost immediately: on a ship leaving New York harbour as Stefan Zweig and his wife leave what will be their last voyage abroad, on their way to Rio de Janeiro. The graphic novel is based on the book by Laurent Setsik (an influential book, it also inspired a play being shown in Paris while I was there back in the fall).

Only read about a third of the graphic novel so far, trying to revel in it and not read it all in one sitting which is what I want to do...so far the tension between the Zweig character and his young and nervous wife is one of the book's pulls, but so is the fame that Zweig had at this point in his career. All the boat passengers keep approaching him and making conversation or ask him for an autograph. One forgets how incredibly famous Stefan Zweig was at the height of his career so nearly forgotten was he a number of years back (in the Anglophone and Francophone worlds at any rate). 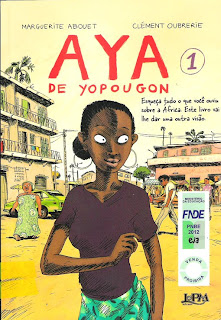 Also been reading Aya de Yopougon by Marguerite Abouet and illustrated by Clement Oubrerie. This one tells the tale of a young girl growing up in Abidjan in the Ivory Coast, of being a young girl and the tension which comes from this in a traditional family. It's a funny book and the illustrations are also funny and charming. It's a book geared at "young readers" but I still find a lot in here that's interesting, particularly the portrayal of contemporary urban African life.

I hear from a few sources that Marguerite Abouet's book is now being made into a film (such an old stories with French writers: a movie is made of their work and suddenly they are impossible to confirm for our Festival, case in point David Foenkinos, Delphine de Vigan, among others...) which is an exciting development for the author and illustrator of her book.