Midnight in Peking by Paul French

Been reading Paul French's Midnight in Peking over the holiday break and finding it an interesting if odd little story.

French chronicles the real-life murder of Pamela Werner in 1937 in Beijing. The adopted daughter of a well-connected (if not well-liked) former consular official, China scholar, and old "China-hand," Pamela Werner is found mutilated one morning on the streets of the capital and the mystery of who killed her and why is the card that French keeps close to his chest throughout. The book straddles the razor thin line separating fiction and non-fiction. 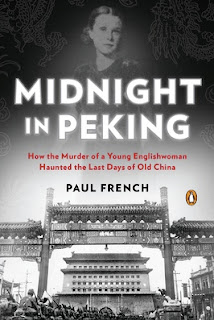 It's written in a novel format with imagined thoughts and feelings of individual characters, with scenes that contain details French could not possibly know with any certainty. But that's where a story like this has its limitations: if one wants to engage the reader, it's vital to suck them into the story with these details that he has to invent which means that it's no longer an historical document.

The danger, of course, is that the story "becomes" history when it is very clearly not history.   I'm not able to articulate in this limited space what exactly bothers me about this distinction but it does bother me and I kind of wish French had fictionalized more of the story, changed names, etc., and only told us in the introduction that it was based on a real case. As it is, it's imagined, fictional details that may or may not be important in between facts that are clearly historical and true-to-life.

Also, though there are some unrelated historical details noted that are not necessarily related to the case, I feel that the book could have done more with this: more about the political situation going on (which French only slightly touches on), about the uncomfortable role that the British and other foreigners held in China as it descended into civil war, about the social conditions and the very recent collapse of the Qing dynasty (again, which French notes but hardly delves into). French mentions some historical details but the fact that it's written more like a novel means that those details are presented awkwardly with 21st century hindsight.

It's readable and engaging though I don't necessarily find it to be that memorable or complex. Made me nostalgic for China, though, which I didn't mind. Still if one wants to read a story of early to mid-century China, there are many other books which I'd recommend before this one, books like The Master of Rain, Shanghai '37, The Rouge of the North, The Song of Everlasting Sorrow, Love in a Fallen City, or even some of French's other books (I loved his book on Carl Crow). Read French's excellent blog for more on China.
Posted by Gregory McCormick at 1/07/2013 08:15:00 AM