Waiting for the Barbarians at the Segal Centre

A really fascinating production of Waiting for the Barbarians has been playing at the Segal Centre these few weeks and there is just one more week left to catch it. I'd highly recommend it. 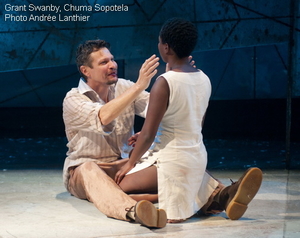 The play is an adaptation of the J. M. Coetzee novel, a political thriller which looks at the complexities and realities of the South African political system as they existed in the recent past.

And they are giving any friends of Blue Met a special price: anyone who books 2 business days in advance gets a $6 discount.

More information here on how to get tickets.

The Segal Centre production is written and directed by Alexandre Marine, the world-renowned Russian director who premiered the play in Cape Town in 2012. Montreal's production is its second world showing and it's a rare opportunity to see one of the theatre world's stars at the top of his game doing something innovative, challenging and provocative.

Check it out: it's one of  Coetzee's best-loved and most critically-acclaimed works and the production is absolutely riveting.
Posted by Gregory McCormick at 2/11/2013 05:19:00 PM