Erik Larson: In the Garden of Beasts

Such busy weeks and I've had little time to update my blog. But things are starting to slow down somewhat (though I expect it'll be busy until the Festival-time). 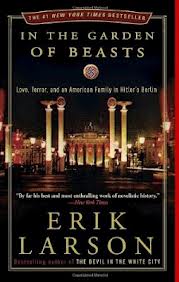 I've been reading Erik Larson's which tells the story of the Dodd family, the unlikely college professor who was appointed the US Ambassador to Germany in 1933. He travels with his family to Berlin just as Hitler is starting his rise to power the book is a fascinating chronicle of those years before the war, before all the information about what the Nazis were doing came out.

The book shifts back and forth between the official life of Ambassador Dodd and his daughter, Martha's (in her early 20s) as she has affairs with various unseemly characters and takes full advantage of the nightlife that Berlin has to offer a young person in the 30s.

It's a really wonderful read. Hear more about it here, Fresh Air's Terry Gross' interview with Erik Larson on the publication of his book.
Posted by Gregory McCormick at 2/21/2013 08:39:00 AM