Guy Delisle and his travels

Getting back into the swing of things after reading only sporadically the last month. Well, not sporadically, I read every day but no 2 hours lounging around in my favourite chair in the evenings or falling into a book all weekend. 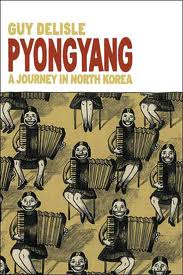 The last week, been pretty much reading only Guy Delisle. Delisle is one of the stars of Graphic Fiction/Memoir and his style: straightforward, almost non-lyrical - belies the more flowery approach (in terms of language and drawing style) of graphic memoirists such as Alison Bechdel. But I have been loving his books. I came across this trove of his books a few weeks back: Shenzhen: A Travelogue from China, Pyongyang: a Journey in North Korea, his two early works, Burma Chronicles. His new one, Jerusalem: Chronicles from the Holy City comes out in April.

Delisle's North Korea book traces a few months he spent there as an animator (and, in fact, his descriptions of the process of animating a TV show are just as compelling as the bizarre cultish world of Kim Jong Il's people), his relationships with his guides and translators as well as other animators and foreigners working in Pyongyang. What an amazing opportunity and what an amazing experience to capitalize on. Delisle keeps a certain distance from his reader, he doesn't go into enormous details of his past or his emotional reactions to certain things on an individual level (though he certainly reacts as a normal human would to the bizarre universe of modern North Korea).

His early works are interesting but contain very little language (even at his most verbose, Delisle is not a writer in the way Bechdel is but an artist, his language straightforward and not often loaded with subtext) but are amusing if a little bizarre at times. They are also quite funny though these are works that can be read (and re-read) in a single sitting. It's funny to see how his earlier works contain the germ that he would bring to his more complex travel chronicles.

I am just starting his Shenzhen book and I am looking forward to seeing what he does with it in China, a country I have a long association with. Maybe one of these days he'll make it to Japan and write about it though he'll need a lot longer than three months to really make any sense of it...