Are You My Mother by Alison Bechdel

I finally got around to reading Alison Bechdel's latest book, Are You My Mother? Interesting read. Not quite as engaging or as emotionally appealing as her last book Fun Home but I still found it to be enjoyable.

to endure in order to come to some kind of truce with her feelings about her. A few things stand out: Bechdel's social anxiety (not that uncommon in writers and something you get a real sense of when you see Bechdel on stage), her OCD tendencies and how they manifest themselves as an adult, the vibrance and intelligence of her mother and their (at times) fraught relationship.

The book is a testament to how literature can affect our lives: Bechdel reads Virginia Woolf's diaries and compares her own relationship to her mother (and father in parts) and Woolf's feelings about her own parents. I love these kinds of meditations on literature which give literature a role to play in understanding our lives. Bechdel is also obsessed with psychiatrist Donald Winicott (a contemporary of Woolf and of Freud) and tries hard, too, to see her own mother issues by considering them through Winicott's theories on subject, object,  attachment, and true self. To me this is where the book breaks down somewhat, particularly in this day and age when so much of psychoanalysis has little cultural impact or is seen as being somewhat anachronistic. 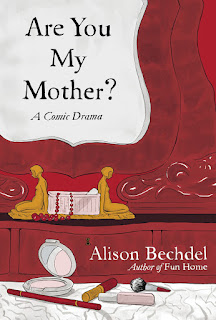 One wonders, too, about why Bechdel seems so self-absorbed at times: as if her relationship with her own mother means something to all her readers (a short riff/discussion on the personal being universal and vice versa doesn't justify what is, essentially, her need to answer questions that not answerable in relation to her mother, her own identity, her damaged adult-hood, her troubled love life, her tendency to over identify with her therapists, etc.).

But it's a great read and the kind of book whose universe I missed when I wasn't in it. Bechdel's own vision of herself is so clearly defined and articulated and her mother is a character that is fully developed.

The need to understand her relationship with her father never caused any pause in Fun Home. There was trauma, pain, and, of course, his ultimate suicide at an age when most people are vulnerable to psychological damage. But after reading Are You My Mother and witnessing similar questions turned around in an obsessive and not wholly healthy way,  I am curious now what Bechdel will do next, how she will move past these self-absorbed questions and externalize her gifts again as she did with her long-running column, Dykes to Watch Out For (though she claims that much of the action was based on her own life and the lives of her friends).