Leonardo Padura coming into his own...

I was so happy to see this Jon Lee Anderson piece on Leonardo Padura in the New Yorker last week. I've been writing about Padura for a while, before he even came to our Festival in 2012. His events didn't get as much buzz as I'd have liked and I was pounding the pavement with his books, trying hard to sell them and sell his events, but his participation lacked the buzz that some other events had. 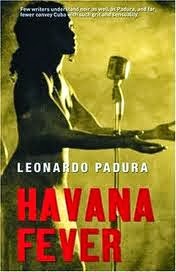 This is a tricky part of programming a literary festival: of course, my job is to "sell" all the events and writers associated with the festival each year, but the public and the media seem so fickle at times, and it's not always easy to predict which authors will capture the public's imagination or interest. And every year, naturally, I have my favourite books or authors that I try hard to get the public and media interested in. It doesn't always work.

So I thought I'd take this opportunity to sell Padura again: he truly is one of the most interesting writers working today, not only in Cuba but in the Caribbean broadly. He writes these almost 19th century crime novels that present a complex and intricate view of life in modern Havana. Because his characters live in Cuba, there are no smart phones or Internet so the novels recall the past in tone and function. His novel Havana Fever shows his protagonist, Mario Conde, as he adjusts to his retirement. He becomes involved in book selling (which sets up a beautiful metaphor about the role that books play in modern life) and then comes across an article about a mysterious bolero singer who disappeared in the 1950s.

Padura has also written a more political novel (as of yet untranslated into English) as well as a book on Hemingway. As Anderson puts it in his piece, "For Cuba's intellectuals, and for its professional class, a new Padura book is as much a document as a novel, a way of understanding Cuban reality."
Posted by Gregory McCormick at 10/24/2013 10:38:00 AM