One of the first novels about China that I can remember reading is Amy Tan's The Joy Luck Club. I loved it. Then again, I was only  15 or 16 when it came out and I remember getting a hold of a copy of it at the public library. I had had no experience or thought of China and in the town where I am from, China is about as far away as one can be culturally.

So the book opened up a new world for me and at that impressionable age, attracted me to all things Chinese. Later I would live in Shanghai and Hong Kong for years, learning Mandarin and writing a good deal about contemporary Chinese literature.

I largely forgot about Amy Tan: I read A Kitchen God's Wife years after my first encounter with her but I hardly remember it. China was always portrayed rather tragically by Tan. When the film version of The Joy Luck Club was released, I saw it in the theater but was disappointed because it fell so far short of the book. 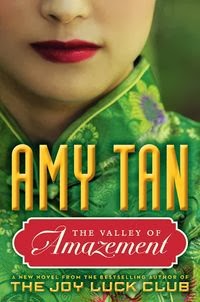 All of this to say that I picked up her latest book last week and have been reading it. I have to say that I have mixed feelings about it. And I'm not sure if it's just my critical abilities have developed a lot since I was 15 or if it's a flawed book though I'm reading it actively and will finish it. One problem I often have with "historical fiction" (a term I am using loosely), particularly told in the first person, is that the narrator is too often a modern figure, "translating" an older culture for us in the modern world. So the limitations of that modern point of view underline all the analysis and editorializing about the historical period. The narrator of Tan's new book (The Valley of Amazement) seems like a kid from the 1970s USA trapped in the world of 1920s Shanghai: her insights, her feelings. It's also clearly told from an adult's point of view since the insights are uneven: the things she understands are odd (the complex machinations of her dragon-like mother who runs a brothel are crystal clear for a 7 year old). Her voice is irritating. Maybe that's what Tan intends since she (Violet) is supposed to be a spoiled child but it's when we move out of her voice into another character's the the book gets interesting.

There are sections which are absolutely riveting. When Violet, the main American character, is "tutored" by an ageing courtesan, the story comes alive. It's fascinating all the rules and complex courting rituals that courtesans followed in order to be successful. And make no mistake, it was merely a matter of survival, no hedonistic impulses were part of the equation (for the woman, at any rate). The amount of research that must have gone into this is something I can't stop thinking about as I read these long sections about clothes, fashion, envy, increasing one's reputation, attracting men, sexual prowess.

What strikes me is how similar the rules of our "celebrity culture" are similar to the world of being a good courtesan.

It's the main character's voice that I find hard to bear. Why is she so obsessed with her mother's love? This seems like a modern invention, particularly given the fact that in traditional Chinese society, parents never tell their kids "I love you" (True, Violet is half-American and her mother is completely American but Violet has grown up in China with her mother as just about the only influence from American culture and not overly warm, etc.). This deep-seated insecurity seems very much like a modern invention to me (not that Chinese kids didn't want their parents' love but they didn't obsess over it). Tan thanks Lisa See in her acknowledgements, a mediocre writer whose work suffers from many of the same flaws as this one does. 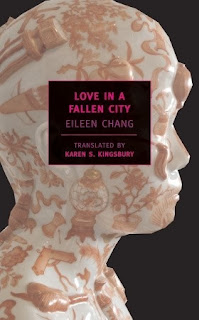 I am a big believer that one can like popular fiction and still be a "good" reader but I am not really getting this book. Oddly though it has hooked me (often I won't even finish books I am enjoying). And it makes me wonder if I should re-read The Joy Luck Club to find out if it's as good as I remember. Or perhaps it's better if I leave it and let it remain in the past.

But where Tan shines is, oddly, when she reaches back and shows us this world from a Chinese point of view (not a Westerner's point of view). In these beautiful passages I am reminded of Han Bangqing's novel (translated by Eileen Chang), The Sing-song Girls of Shanghai. It's a much more interesting book (though perhaps less so to contemporary North Americans since the narration is not exactly what we are used to).

I've written about Eileen Chang before but I come back to her writing again and again, always finding something new, always enjoying my time in the worlds she creates.

I've often heard people say to me that they're not interested in China. I guess on one hand, I can understand that since all we hear in the media is negative stories about it: how dirty it is, how corrupt, how chaotic and crowded, etc. All of this is true. But China is an incredibly complex, amazing, and yes beautiful place with thousands of years of history. I find it endlessly fascinating (and yes also frustrating, nationalistic, self-centered), particularly these visions of Shanghai in the early part of the 20th century. 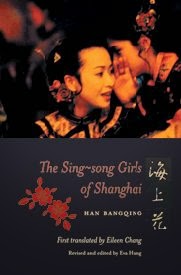