I've just finished Haruki Murakami's Tsukuru Tazaki and His Years of Pilgrimage and I have my usual contradictory feelings about Murakami and what he does.

The book's an easy read, which can't be said for all of Murakami's novels. I find many of them positively painful (1Q84 case in point). The story doesn't delve too much into the alternate realities that Murakami is so fond of creating (well, it does, but not as much as in other works). This book is more "social" than many of recent works: he is interested in how social convention dictates certain behaviors. That feels like a new theme for Murakami (or at least not one that he's explored in many years).

The story is relatively straightforward: a group of five high-school friends decide without any explanation to expel one member of their group without explanation, the colorless Tazaki of the title. Naturally, he is scarred and all his other adult relationships are not able to progress to any "normal" level since he is so scared of being damaged again by anyone else. As is often the case with Murakami, he has to go back to the past to understand who he is as a grown man. 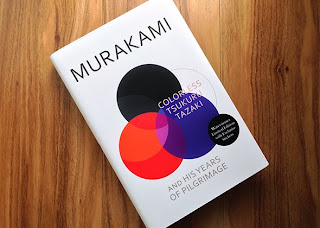 And yet: I don't buy it. I don't buy Tazaki's passivity. Nor his utter lack of curiosity as to why this happened to him (until much later in his life). Murakami has never been a master of character development and often his characters are rather flat and passionless. And this is the case here: I find myself not really caring that much about any of these people. That's fine: that's not a testament to whether a book is good or not. But in addition, I'm just not interested in the themes that Murakami is so interested in: young love, adult relationships that are influenced by early traumas, suicide, different existences on parallel planes, etc.

Also, as I've noted earlier about Murakami more than once, his over-reliance on Western culture references starts to grate on me: Liszt and Coltrane and Hemingway and Janacek, etc. It's like he's courting Western readers in this very open-faced way: are there no Japanese cultural icons of  note in his world? No musicians, no historians, no philosophers, no writers? Why are all the cultural references Western artists?

I'm glad the world has Murakami and if I knew nothing else about contemporary Japanese culture, I might really appreciate him more. But I often find that people who are crazy about Murakami are either new to Japan or know little to nothing about it. There are so many other Japanese writers who do more interesting things with novels. He's the accessible Japanese writer that all reviewers and critics compare every single contemporary Japanese novel to and that's terribly unfair. He has a huge influence in Asia, no question, but he reveals little about contemporary Japan. Maybe that's OK, too, maybe that's not what he's after. But if someone really wants to read good writing from Japan, they should read Yasunari Kawabata, Yukio Mishima, Minae Mizumura, Junichiro Tanizaki,Yoko Ogawa, Hiromi Kawakami, the other Murakami: Ryu Murakami or 25 other writers (Japanese crime writing is particularly interesting, I think).

Overall, I liked this one better than his last one but this'll go on my shelf and it'll be forgotten in two months beyond some vague recollections that will mean little to me going forward.
Posted by Gregory McCormick at 5/08/2015 07:53:00 AM