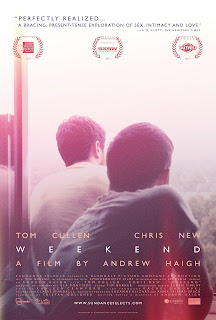 Saw a great movie yesterday afternoon on Netflix, Weekend by Andrew Haigh. It's not a new movie, maybe a year old or so, but it was lovely, about two young men who meet in a bar in Notthingham and have a weekend together. It reminded me of Richard Linklater's Before Sunrise in some ways, that 1995 film (and its subsequent sequels) where two young people explore what it means to be themselves, to be looking for someone else, to be young (or in the case of Weekend, gay) in the world today. Andrew Haigh's film is better, though, and lacks the self-consciousness that Ethan Hawke and Julie Delpy need to make their characters convincing. (That said, Before Sunset, the second of Linklater's movies has one of the most amazing final scenes of just about any movie I've ever seen.)

As is my habit, I then read several reviews of the Haigh film which confirmed to me all the lovely complexities that the film explores. But mainly it's that final scene which stays with me and the light-handed touch of the director who never lets it drift into melancholy or cliche (though he does play with cinematic cliche in interesting ways). The emotional core of the film, which all comes together at the end, is terribly honest and moving. 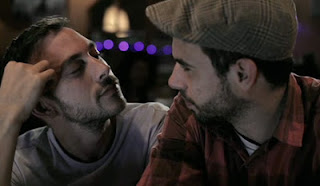 What struck me, too, is how life is shown in such a realistic way: life as a series of conversations, some pleasant, some emotional, some tense, some banal, some irritating. And isn't that how we all get through life, drifting from one conversation to another? There are no "lessons" here, nothing didactic about playing witness to these two men falling in love and the limitations that are imposed on their relationship.

At any rate, it's a beautiful little movie with solid acting and writing, one of those movies that stays with you for days afterwards.
Posted by Gregory McCormick at 11/18/2012 12:48:00 PM