So I was kind of obsessed with the graphic novel series, The Walking Dead for a few years and avoided the TV show until relatively recently. Now coming up on the end of the 2nd season on Netflix (I know the 3rd season is running on AMC now but I never watch TV on TV and am always behind!) and though they changed the plot in many key ways, the producers have somehow managed to capture the angst and themes from the books (not to mention the terror and creepiness).

Basic premise for those unfamiliar: guy wakes up in a hospital bed after being shot and the entire world has changed as he has been in a coma. Some strange disease has taken over the world and now the "dead" are no longer dead but zombie-like, hungry for flesh, terrorizing the few humans who have managed to avoid getting the disease (which seems to be caused by bites or scratches from the walking dead). Society, needless to say, has broken down, and the cities are uninhabitable as the zombies crowd every street and residence. Small bands of humans escape and live in hiding, ready to move at any minute. 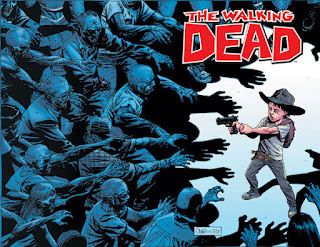 OK on the surface kind of hokey. True enough. But what the series does is explore what our society means by showing us a society with extreme violence and where the sense of right and wrong is completely up-ended. In a sense, it operates like Mad Men (which, again, is much more about our society than the world of 1960s misogynistic advertising executives) but turns it over: what does it mean to be a "man" to be brave or a protector when the world is turned upside down? Why do we automatically revert back to these old paradigms of man as protector, woman as sweeper of the hearth and nurturer when things become drastic? Also themes of being a leader, being "the odd man out," conforming, and, of course, what it means to be human. 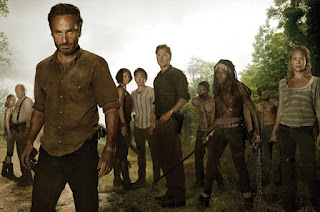 It's not a perfect show: sometimes the dialogue is god-awful. The southern accents are appalling (the story is set in Atlanta and rural Georgia). It gets a bit soap-opera-y at times. And there is almost no point in the show when you feel like laughing. It's heavy, deadly serious.  But it's worth watching. And as The Tyee suggests: perhaps it fulfills some kind of primordial need to explore our worst fears (which used to be filled by stories of Armageddon, the end times, hell, etc.)

Sidebar: Netflix Canada: only $8 a month and yes if you want something that's just been released or something very specific, forget about it. But there is plenty there worth watching...I haven't rented a movie in years (and now only download a movie occasionally from iTunes when it's something new or very very specific).