Been reading Hans Fallada's Every Man Dies Alone, a bleak if not reflective title of a highly readable and exciting novel. 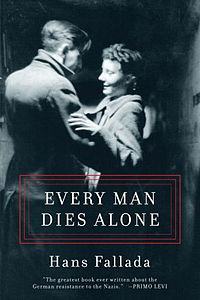 The book is set in Berlin just during the Nazi years and chronicles the lives of various individuals as they resist, acquiesce, escape, persecute, rob, manipulate, or love in the tumultuous period of the war. The book received a great deal of attention when it was first published (back) into English a couple of years ago but I can understand now why so many critics and readers raved about it. The pacing is excellent, the characters run the gamut from the downtrodden to the drunks to the powerful and the powerless.

The main protagonists are based on a real-life couple Otto and Elise Hampel who resisted Nazism in the only way their station in life allowed them. Without giving too much away, what they do is incredibly brave and terribly foolish. And it's not a voice we've heard too often on this topic: how Germans themselves fought against the Nazis, stood up to brutality, protected the persecuted. Though, all that said, there is nothing heroic about anyone here. And much tragedy. But it's also quite funny in many parts.

It's a great novel and a very easy read. I'm not quite finished with it yet (at this time of year I can only manage to read a few chapters a day in a book that's not directly Festival-related) but I look forward all day to the 30 minutes or so I can devote to it most evenings.

Hans Fallada is an intriguing author who struggled with mental illness, alcoholism and other afflictions during his short life. He wrote a good deal and though he had one big hit outside of Germany in his lifetime (translated as: Little Man, What Now?), his international reputation faded and he was largely neglected until Melville House re-translated several of his works in the last few years. Definitely adding some other of his works to my must-read list this holiday season.
Posted by Gregory McCormick at 11/22/2012 08:22:00 AM