The October Crisis in Fiction

I've been reading Louis Hamelin's October 1970 which has been a fascinating history lesson. Naturally, I know about the October Crisis but reading about it from a fictional point of view is a really different take on the dry historical accounts that I've read. Hamelin's myriad of accounts (real historical characters given new names though very easily decipherable) gives us an interesting take on the emotional lives of these (to us) dry historical figures that have little to say in a history book.

Claire Holden Rothman, too, revisits the same time period in her recent novel My October (long-listed for the Giller Prize, the winner of which was announced last night: Congrats, Sean!). 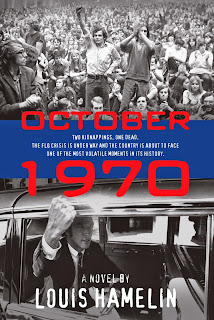 Both books are excellent ways to revisit a precise historical moment in Quebec's past with the hindsight of 20/20. Hamelin's book shows what happens to radical youth once middle age sets in and Rothman's book shows, too, how the ordinariness of growing old has the ability to tame even the most violently revolutionary spirits. Hamelin's book is more akin to the "real" story (if such thing exists; this, in fact, gets at the heart of Hamelin's project: determining what the "true" story really means) and Rothman's is, in a certain way, more readable. But both books I found to be solidly interesting reads for different reasons despite the similar historical focus points.

I often think about how age softens one's political ideologies. It's not necessarily that everyone becomes more conservative as they age (though that's often the case) but that revolution and radicalism is often a young person's game. There is less at stake for young people, after all, and less to lose. Whereas once one has a family, a mortgage, a safe if rather dull circle of friends, it gets harder and harder to put these materials things on the line for the sake of an ideology. In this way, perhaps, the books show us the same story from different angles: Hamelin's from the radicals' points of view; Rothman from the middle-aged parent's point of view as he reflects back on his life and career (he's a writer). 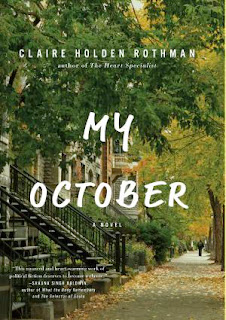 Hamelin's book hops around a lot in time and it's not always easy to keep track of the chronology. Rothman's book is more straightforward, though hers does skip back and forth in time a bit. What struck me about Rothman's book, though, is the fact that it's an Anglophone writer, creating a protagonist who's a Francophone nationalist. (I also liked Rothman's book because, given my fascination with place, it's set in a house just a few blocks from our offices in an area I know very well).

Hamelin is a master of little memorable quips that practically leap off the page. ("Even exceptionally creative people launch their little fictions into the world," which the writer at the National Post also noticed).

Now that awards season is starting to wind down (always a bit of relief in my world when it means fewer launches, prize ceremonies and cocktails to attend in the evenings), it's a nice chance to take a closer look at some of the various prize nominees to revel in them: why even being on the long-list of a prize means something (Rothman's book was also nominated for QWF awards; Hamelin's book was also on many awards list including the Giller prize long-list in 2010 for Wayne Grady's translation into English).

Though I live in Quebec, I am certainly no expert on Quebec history so it's also a good opportunity to learn more about the place where I live...
Posted by Gregory McCormick at 11/11/2014 10:15:00 AM