When Thomas Piketty's book, Capital in the Twenty-First Century, first appeared on my radar a while back this spring, I knew I'd have to read it. I think Slate did a segment on their Culture Gabfest several months ago (maybe longer?!) and I had read several reviews of it before this even.

It's rare that a book on economics, on income equality, gets so much buzz. It was on the New York Times best-seller list and was also a best-seller in France (it was written in French and translated into English by Arthur Goldhammer). I've been reading it the last while and really finding it fascinating. So much of what Piketty suggests (so far) is counter-intuitive:

"It does not appear that capital mobility has been the primary factor promoting convergences of rich and poor nations. None of the Asian countries that have moved closer to the developed countries of the West in recent years has benefited from large foreign investments, whether it be Japan, South Korea, or Taiwan and more recently China. In essence, all of these countries themselves financed the necessary investments in physical capital and, even more, in human capital, which ... holds to be the key to long-term growth."

Having spent much of my young adulthood in Asia, particularly in China, this came as rather surprising news to me, especially since it seemed to me that China opening up precisely meant opening itself up to foreign investment and capital exchange and that was what led, at least in part, to China's extraordinary development. But Piketty provides ample evidence that this wasn't the case. 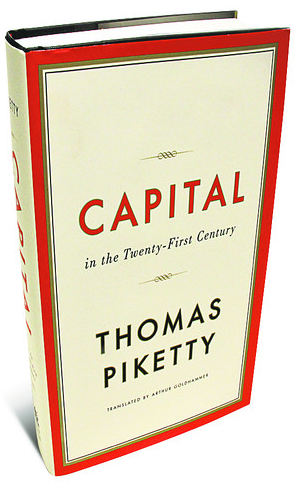 Later Piketty goes on to provide more detail about this "human capital" angle which he sees as the key to economic development. And the entire discussion is fascinating. There is so much else here that is worth exploring and relating but it all ends with an appeal to get this book and read it if income inequality interests you. This is not "pop" political writing or economics. It's graphs, charts, historical trends, hardcore statistics. But it's pretty readable (so far, I'm only about 1/3 of the way through it).

One of his main thesis ideas is that the world may be moving into a period of slow economic growth and, in fact, that this level of slow growth may be the more "normal" rate that economies grow. He suggests that the extraordinary growth of Europe, and then later in the Americas, from the Industrial Revolution until about a generation ago was a historical blip primarily and overstated secondarily.

I don't have a background in economics though it interests me as a discipline very much. Because I read mainly fiction, I do find I have to read this in a different kind of way: slowly, methodically, going back and re-reading certain passages when my attention wanders for a moment. This process has been interesting, too. I tend to read fairly quickly but that kind of reading doesn't work with this book. It's not that the ideas are terribly complex or hard to understand (it is, as I said, very readable, and the translator, Arthur Goldhammer, has sure made these concepts are accessible) but that the ideas and sentences require precision and patience.

I shouldn't be reading this book right now. I have about 10 others book on my office shelf that are crying out to be read before Christmas since they all involve Festival authors (or potential Festival authors), but it's good to take a break from Festival reading and just delve into something that I enjoy. Anyway, I have a terrible habit of reading too many books at the same time (also reading Ian Hamilton, Nancy Huston and Shigeru Mizuki) out of sheer necessity.