Elena Ferrante: The Story of the Lost Child

The 4th instalment in Elena Ferrante's Naples series hits this bookshops tomorrow and I'll be there to pick it up. I'm not writing a review of it today (not that I write reviews here really) but I did want to remind those who've read and and become fans of Ferrante to check out The Story of the Lost Child from Europa Editions.

Ferrante's books came onto my radar some time ago but after I started writing about her last year, several people picked up her books and told me that they really liked them a lot. At least eight people stopped me at the Festival in 2015 to thank me for introducing her here and on my social media. 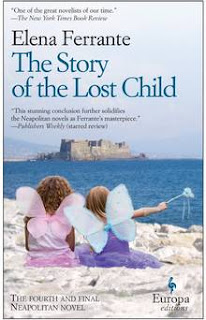 Not everyone has raved about her: one person whose opinion I trust a lot told me that she just couldn't connect with the two young girls in My Brilliant Friend. Another person, a friend, told me that she didn't really connect with the books until about 1/3 of the way through the 2nd one, The Story of a New Name. Fair Enough. Not every book speaks to every reader. But the vast majority of people have really liked them a lot and become a bit crazy about the Naples series in particular.

We did an Elena Ferrante Breakfast at the 2015 Festival which was one of our biggest breakfast events ever. We generally try to keep these breakfast events at 10-12 but 27 people showed up to that one! And a very interesting discussion ensued (participants kept asking if the host was really Elena Ferrante which made us laugh hysterically afterwards).

Given the fact that Ferrante refuses to do publicity and is highly mysterious, when she does rarely agree to give an interview, it's a big deal. She spoke to the Paris Review several months ago and Vanity Fair managed to score an interview here as well. This one I find better than the Paris Review interview because there is so much about the friendship at the core of the books. But I wouldn't read them until you've read the books because lots is given away (not spoilers per se but one of the pleasures of reading the books is simply going in blind and discovering the world for yourself). Scott Esposito has a review here on SF Gate of the latest.

For those who aren't familiar with the series, they chart the friendship of two girls in Naples in the 1950s and each new instalment traces the women's relationships through the ups and downs of late 20th century Italian history. But that makes the books sound dry and detached and they are far from either.