(No I have no deal with them! I just love the movies they show.) 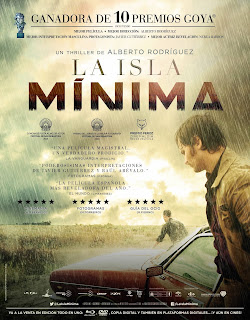 Saw Marshland last night and was mightily impressed. Set in 1980 in southern Spain, the film is in a certain way a standard "whodunnit" but in the midst of the aftermath of a post-Franco government where nothing is what it seems and everyone has something to hide.

Filmed very beautifully with this aspect of nature that one rarely sees in Spanish film, the atmosphere is stifling, reflecting the small isolated town where it's set. When two sisters go missing, two police officers from Madrid are sent to investigate and they discover a series of young murdered women going back years. A plethora of red herrings and deliberate obfuscation part and parcel of all crime thrillers, but you're at the edge of your seat for much of the movie (and a few perfectly terrifying scenes).

The background is just as interesting though it's very understated (which seems to be the trend in these kinds of movies or TV shows where directors and writers make these broad political suggestions by simply planting a few clues about social things happening in the background): in the immediate aftermath of the death of Franco and Spain's slow transition to democracy, the past is still something people aren't willing to come to terms with and fear is a major part of the average person's response to any figure of authority. This colours, of course, our heroes' investigation and when one partner hears of the nefarious past of the other, it's not clear how this will end up.

Marshland has won a whole slew of awards and is widely acclaimed as one of the best films to come out of Spain in a few years (I love Spanish writing but their films rarely hit the mark except for the odd Almodovar film here and there). The film plays at Cinema du Parc all week next week. If you're a fan of crime thrillers, of the TV show True Detective (you can see the influence of that show on the movie), or of recent Spanish history, it'll be an interesting ride.
Posted by Gregory McCormick at 8/21/2015 02:30:00 PM