Been reading this amazing collection of short stories by Yasunari Kawabata this week, "First Snow on Fuji." Translated by Michael Emmerich, the stories date from the mid-1950s and there are some real gems here.

The title story recounts the doomed love affair of a young couple who get pregnant before the war (WWII) and because of happenstance are not allowed to remain together. The woman is taken by her family away from Tokyo ostensibly to protect her from the air raids but really so that she would not be tempted to marry the man who impregnates her. The story starts eight years after this, the couple is reunited on a train, looking out the window at the first snowfall on Mt Fuji. They discuss their recent pasts--she has left her husband after eight years of marriage though, as custom seems to dictate, she is no longer allowed to be with her two young children--but they also reflect back on the child they had together who died shortly after birth. It is this death, both the death of the child and the death of their love, that haunts them both. Mixed in with this painful history is Japan's own painful wartime experience: the air raids, the mass loss of life, the radically altered society.

"Let's talk until morning," Utako whispered, "But I don't want to talk about some things, okay?"

Jiro put his arm around her and drew her closer to him.

"Are you able to sleep well these days?"

"Oh, I'm always so exhausted...hold me the way you used to," Utako said, lying very still.

"Hmm - how was that?" Jiro felt slightly at a loss.

Utako smiled. "I can't believe it -  you've forgotten, haven't you?"

"And you used to be so quiet."

"Of course. I didn't know anything then."

Jiro closed his eyes, trying to call up the images of Tokyo's streets burning in an air raid. He      remembered the broken corpses. This was the method he used to keep his desires in check.

So much is communicated in this little scene from the story: pain of loss, aging, memory, desire, war, guilt.

Other stories stay with me, as well: "Silence," about a writer who loses his voice and ability to write after a stroke and the pain his daughter goes through in sacrificing her life to take care of him. In "Row of Trees," a family falls apart while oddly focused on the fact that the leaves on the trees outside their house are falling off in a bizarre, seemingly inexplicable way.

Kawabata was Japan's first Nobel Prize-winning writer (in 1968) and the introduction to the collection here (by Emmerich) traces the difficulties he faced once he became so enormously successful. Oddly, the theme of the silence of the writer surfaces strongly in this collection, one of Kawabata's last before success truly would silence him. He died, of suicide, in 1972, four years after his Nobel win and two years after his most famous protege, Yukio Mishima, committed suicide himself in a spectacular and quite public coup attempt (beautifully chronicled in Mishima, by Marguerite Yourcenar). 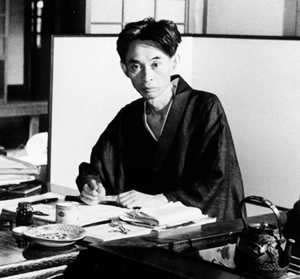 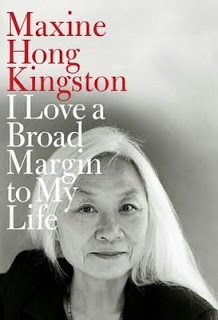 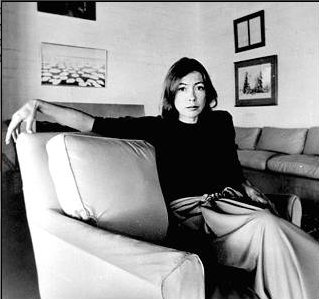 One writer who I've discovered posthumously is Albert Cossery, an Egyptian novelist and graphic novelist who died in 2008. A big proponent of laziness (which he called the route to which one could find meditation and creativity), he didn't write much in his long life: just a handful of novels and some stories. But his work is going through a kind of Renaissance in the English-speaking world (he wrote in French) with several new translations (including this one done by Words Without Borders of his 1955 graphic novel, "Proud Beggars.")

He'd have much to say, naturally, on all the political happenings in Eqypt and though he lived in Paris most of his life, all of his novels are set in the streets, markets and alleys of his boyhood Cairo. He was very much interested in the struggles of the poor and his work has a beautiful and moving humanity to it.

"A great book gives you extraordinary power. You may be poor, miserable, ill, desperate; reading a great masterpiece makes you forget all that."  From Conversation avec Albert Cossery

Where I wax poetic about Milosz and living in a foreign city... 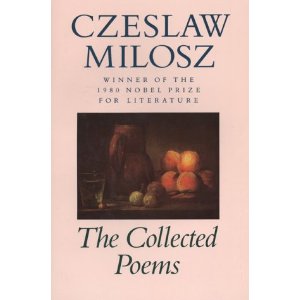 One of my most favorite writers is Czeslaw Milosz, the Nobel Prize-winning poet (1980) from Lithuania/Poland. Oddly, though, even though it's been years since I left, I still associate him with Shanghai. Years ago, when I lived in there, I'd ride my bike over in the mornings to the Shanghai Public Library and spend two hours in their reading room before work, reading from his Collected Poems tome which contains much of his early and mid-career work. Those were such amazing hours: the reading room was empty (you had to practically sign your life away to get a card to enter) and the the 2nd floor had a wall of windows that faced a back garden. It was a rare opportunity to experience quiet and calm in that grid-locked, loud and boisterous city of 18 million.

Afterwards, I'd ride my bike over to my office, past the foreign embassies and villas in the old French quarter of the city, Milosz' words still playing in my head.

And here I am walking the eternal earth.

Tiny, leaning on a stick.
I pass a volcanic park, lie down at a spring,
Not knowing how to express what is always and everywhere:
The earth I cling to is so solid
Under my breast and belly that I feel grateful
For every pebble, and I don’t know whether
It is my pulse or the earth’s that I hear,
When the hems of invisible silk vestments pass over me,
Hands, wherever they have been, touch my arm,
Or small laughter, once, long ago over wine,
With lanterns in the magnolias, for my house is huge.
- From "It Was Winter"  1964
I can remembering longing for winter in that city of heat and humidity, wondering if I would ever have the
chance to experience a real winter again. And here I am, these years later, in a region famous for its cold
winters and snow & ice. Shanghai feels a million years away and Milosz's work is one of the strongest
memories I have of my years there.
This is what poetry should do: keep us alive as we experience and prime us for our future... 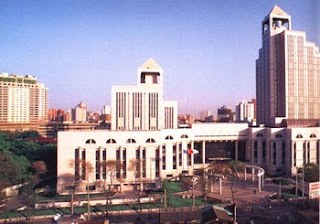 Judy Fong Bates' 2010 memoir The Year of Finding Memory is absorbing my attention when I'm not thinking about Festival-planning. Because I lived in China for many years when I was younger, the book gives me a lot to chew on and Bates has a real gift for re-creating that specific kind of small town life in southern China. 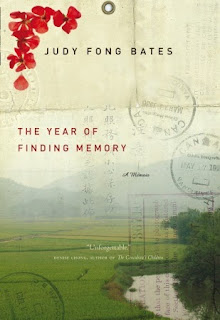 Bates chronicles her two trips to China as an adult, attempting to trace the history of her parents' lives in the years prior to 1949 (the Communinist takeover in Mainland China) before they left China and move to small town Ontario. What she gains from these trips is powerful: she learns who her parents were up and beyond the hard life they struggled to maintain in 1950s rural Canada.

The last section (the second trip) feels unnecessary, though, and Bates delves into typical traveler hijinks (odd stares by locals, bizarre dishes at restaurants, learning to haggle in public markets) that distract from her overriding purpose her: to give life and humanity to her mother and father and others who were, by and large, de-humanized (by struggle, by Canadian society, by a rebellious child trying to understand who she is trapped between two cultures). By the end, we, the readers, have made this journey along with her ourselves, and we come to understand how history is not just facts in a book, but life-changing forever altering, and inescapable on a human and individual level.

Judy Fong Bates was born in China but came to Canada as a young girl. She is the author of a collection of short stories, China Dog and Other Tales from a Chinese Laundry.
Posted by Gregory McCormick at 2/18/2011 08:41:00 PM No comments:

The first Blue Met blog post. Yes, it's quite true that blogs today -- blogs for festivals, publishers, editors, writers -- are as easy to come by as first-time novelists. Still. It's got to be done and allows a host of ways to let our Montreal audiences know what we're thinking and how we put together our Festival each and every year. 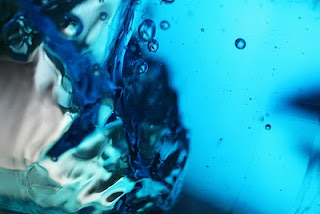 It's a new chapter in the life of Blue Met, and this upcoming Festival, our 13th, is a chance to show the world some of the best in Quebecois, Canadian, and World literature. I'm forbidden from revealing anything about our lineup but all that will come in due time.

In the meantime, I aim to announce literary news here, feature writers and books, discuss topics and trends going on in the literary and arts festival programming world (an entire industry in and of itself, believe it or not), and link up like-minded literature lovers...