Jonah Campbell and the Profane

Jonah's Campbell's interesting collection of essays on food has been following me around the last week or so and I've pulled it out of my bag at odd times, just enough time to read one or two essays and consider them carefully. 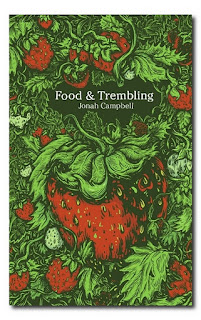 What I find interesting about this book is one that represents a trend that has been happening the last few years in the gastronomie world: pairing the sacred and the profane. For example, a restaurant I recently went to in Toronto, The Gabardine ("Fine Grub and Libations!"), or dishes at Joe Beef in Montreal which include spam and foie gras on one plate, just two of many examples.

When one picks up a book "about" food, one expects a certain kind of gravitas but Campbell subverts this almost instantly (even in the title with its nod to Kiekegaard) in his first essay by exploring the condiments required to make a perfect BLT (his point: the bacon isn't really necessary). And throughout the book he takes obscure French culinary terms and defines them in practical, humorous and even irreverent terms. Anyone who walks around representing "the old school" (if such people actually exist) would hate this book.

It is a fixture of my insufferableness that if, when embarking publicly on an analysis of some  quibbling feature of language or social reality, I am met with skepticism and (supposed) indifference so fervently avowed as to border on the venomous, I take it as an indication that I am on the right path, and my resolve is strengthened  accordingly.
You know, I'm like "Hey, you ever think about how blah blah blah?" and they're all like "that's stupid, who cares, please shut up," and so, inevitably I'm all "Whoa ho, methinks thou dost protest too much!" and I become even more interested in whatever the fuck it is--cabbages or something ... more specifically the currency and polysemic richness of chou (cabbage) in the French language...

He then goes on to consider the word chou and all its significance to the French language in idiom and turn of phrase and how its use in the language reflects the reality of class distinction. Again, this pairing of the sacred and the profane allows Cambell to explore language and class and cuisine with serious intent in his sometimes stiff and sometimes loose prose without coming across as stuffy or dowdy. An interesting technique if not wholly original.

A few months back in the summer when that children's book Go the Fuck to Sleep was making the rounds, I heard a very interesting analysis of why it had suddenly hit a chord with parents and society generally (I forget where I heard this) which basically was that parents today want to be parental yet still subversive. They want to be parental with all that implied authority but they want to be the "cool" kind of parents who use the word fuck and have a sense of humour about the shared experience of being a parent. As if the very tradition of reading a child a story itself required some kind of rebellious shakeup.

So, too, with much of the writing about and general approach to food culture. Julia Child was a genius in her green cupboarded kitchen with her upper class East Coast accent but she doesn't exactly jive with our modern sensibilities in terms of her style. She's not cool, in other words, and god knows we all need to hang on to our cool at any cost. Perhaps she's not the best example and this trend in subverting food culture has more to do with some reaction to the highly formalized and stiffly ritualized French cuisine traditions, but the point is the same.

Cambpell's book is funny but with serious intent holding it up. Significantly, the book is a collection of blog posts from his site Still Crapulent After All These Years and often the writing feels "bloggy" (lots of parenthetical inserts which I am also guilty of indulging in, I am often told) and though the tone is relatively consistent, the writing gets a bit loopy at times. But I have to say that I quite enjoyed reading it: in addition to being funny, it's insightful, intelligent and interesting. In my view, one of the only unforgiveable crimes is taking yourself too seriously and I can tip my hat at what Campbell has done in carving out this defiant niche for himself in a world that often does take itself (or has taken itself) deadly serious.

This new proposal that Amazon has been bandying about has bookstore owners up in arms: basically it works like this: Amazon has created an app by which one can scan any book in a brick and mortar bookstore and get the USB code, then go home and upload that information to get a discount on the book.

Naturally, people are crying foul and being quite vocal about the fact that Amazon is now overtly trying to force out any and all competitors. Fair enough. I have to admit, though, that I do use Amazon from time to time.

My problem with Amazon is mainly theoretical: they are too big and have too much power. But theory means little when I don't see the practical side of avoiding them. And on the whole, I'm happy when I buy a book from them. It arrives promptly, it's not usually too expensive (though it irritates me when amazon.ca charges 40% more than the US site) and, of course, I know they will have whatever book I need or want.

I do try and get books from Indigo whenever possible (though trading one huge US corporation for a huge Canadian corporation seems a bit short-sighted and I'll save for another day my reflections on Indigo's huge Dundas Square store in Toronto and what it means for the future of books). But because I am almost never a browsing shopper (I always know which book or specific author's works I am looking for and I never go bookshopping just for something interesting to catch my attention), I find that when I go into small independent bookshops in Canada (when I can find one, that is), they just don't have the books that I want. And my dislike for supporting a big competition-busting corporation isn't as strong as my desire to just read the book I want to read. I'm certainly not going to radically overhaul my reading practices to 'save' independent bookstores. So everyone calling for a boycott or encouraging people buy their books at a local independent store are living in a cave, perhaps. Yes, it's unfair what Amazon is doing but boycotting just seems to be another step towards irrelevance for small bookshops.

When I do encounter an independent bookstore that has a very good selection (Nicholas Hoare, for example, or Paragraph) it's just a matter of time and convenience: should I put on my coat and boots, ride the subway for 25 minutes, walk 5 minutes in the hopes that they will have the book I want? Or am I more likely to search click and order and have the book here in a few days? It's not that I won't buy books at small places: if I am there for another reason or happen to find myself in the neighborhood, I am very conscious of the fact that buying books from them is good for the intellectual livelihood of Canada and Montreal, etc. But this is the exception: I do most of my bookshopping online (often I use Powell's though shipping to Canada is pricey and it takes a month sometimes) and in second-hand bookstores (more about that in a second).

I realize, of course, that my problem magnified to 500,000 consumers is precisely why independent bookstores are failing across North America. But unless an independent bookstore sets up shop a block away from my house and has an amazing selection, I don't see myself radically altering my behavior in order to attempt to "save" independent shops. Yes, Amazon is too big. But until someone else comes up with a way for independent booksellers to sell their books (in Canada) more conveniently, I'm not too optimistic. (Maybe some kind of independent internet site which aggregates the stock of independent bookshops all across Canada where people can order and/or pick up?)

I do love The Word and the other second hand bookstores (and I buy more books from these shops than others, perhaps more than even online purchases) and I occasionally go into these shops when I can only to browse (which means I end up buying something that catches my attention). But when we say independent bookstores, I don't think these are the shops we mean. There may always be a market for small second-hand bookstores...
Posted by Gregory McCormick at 12/12/2011 08:40:00 AM No comments: