Like many people, I've read and re-read The Secret History since it came out in 1992. I find it to be an immensely moving and engaging novel, though I do feel that it's a young writer's book in many ways. The balance of power is too stark, the view of the world too limited. 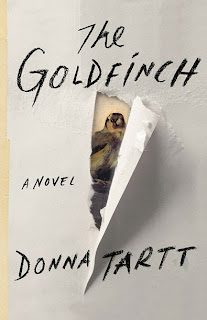 So I was pleased when I landed a copy of her latest book, The Goldfinch which I finished today. What an absolutely fascinating story. It really is a masterpiece. The main character, Theo Dekker, is scarred, neurotic, deeply troubled, but essentially good. When his mother is killed in a terrorist attack in the opening pages, his life is permanently altered and he bumps around the world: from the Upper East Side to Las Vegas, to Greenwich Village and Amsterdam, always trying to heal, to move on from what he has gone through. He is frustrating, heart-breaking, annoying, and complex.

People keep referring to the book as "Dickensian" which annoyed me at first but there are allusions to Dickens throughout and the book is very much a "David Copperfield" type of story. The highly stylized plot is certainly Dickensian. But the book lacks Dickens' social conscience and what Tartt gives us instead is a philosophical conscience: less about the struggling lower classes and more about what it means to live and what it means to suffer.

This world is slightly claustrophobic at times and the last few days I've been having dreams of its stifling regiments: the New York art world, the upper class histories and provenances, the odd obsessions which come about because of too little day to day struggling (which suggests in a kind of way that struggle is universal). It's a book about friendship, about art, beauty, death, love. But it's also a treatise on living in the real world, living not to avoid pain and suffering but by embracing it, letting it be part of the whole experience of life.

"The pursuit of pure beauty is a trap," Theo tells us:

beauty has to be wedded to something more meaningful. Only what is that thing? Why am I made the way I am? Why do I care about the wrong things and not at all about the right things? How can I see so clearly that everything I love or care about is illusion and yet, for me anyway, all that`s worth living for lies in that charm?  We don't get to choose our own hearts. We can't make ourselves want what's good for us or what's good for other people. Because, isn't it drilled into us from childhood on, an unquestioned platitude in the culture - from William Blake to Lady Gaga, from Rousseau to Rumi to Tosca to Mr. Rogers - it's a curiously uniform message, accepted from high to low: when in doubt, what to do, how do we know what's right for us? Every shrink, every career counsellor, every Disney princess knows the answers: be yourself, follow your heart...

If your deepest self is singing and coaxing you straight toward the bonfire, is it better to turn away? Stop your ears with wax? Ignore all the perverse glory your heart is screaming at you? Set yourself on the course that will lead you dutifully towards the norm? Reasonable hours and regular medical check-ups? Stable relationships and steady career advancement? The New York Times and brunch on Sunday, all with the promise somehow of being a better person? Or...is it better to throw yourself head first laughing into the holy rage calling your name?

This is a book I will go back to again and again. Odd that: to encounter a book that you know will be a part of your life for years to come. So much more to say on the topic, so many things occurred to me as I read it. But I'm a bit overwhelmed by it now, it's too close to me now and I have to say that I will miss the world Tartt has created until I have the impulse to revisit it.
Posted by Gregory McCormick at 12/22/2013 06:38:00 PM No comments:

Interesting BBC article here on why French literature is so under-appreciated internationally, particularly in Anglophone countries.

I've often wondered this fact, too. There are some American writers who household names in France (Paul Auster, Toni Morisson, Richard Ford) but it doesn't work the other way: there are almost no contemporary French writers that have international reputations beyond, perhaps, one or two (and even they are generally not writers that anyone outside the literary world would know). Sometimes when a French writer's book gets made into a movie, there will be a minor blip in attention about their work, but this is usually the exception and usually only when the movie gets some attention as well in North America.

Even in my work I will mention huge French writing stars to very well-read Anglophones and they've never heard the name. And these are often people who know international writing, too (Murakami, Zaffon, Pamuk, etc.).

Maybe it's that French writers are rarely part of the "New York" scene or establishment? But that can't be right because Murakami, though well-known in that scene, isn't really part of that world to any large degree (same can be said for many other well-known international writers). Also, I know several French writers that do live in New York and are part of that world but rarely figure on any international lists and rarely get buzzed about in North America. Maybe it's some underlying bias that Americans and British have towards anything French (that's wine, perfume or cuisine?). There's something to this, perhaps.

French movies (La vie d'Adele excepted) also rarely figure into important discussions on film and haven't for probably 20 years. Personally, I find most contemporary French cinema dullsville but I feel strongly that there is much of interest in contemporary French writing.

That said, I feel much more akin to French writers from "outside" France: Alain Mabanckou (Congo), Abdella Taia (Morocco), Marie NDiaye. But there are still some French writers that I think should be at the top of every serious reader's list: Le Clezio, Bernard Pivot, Emmanuel Carrere, among others.

And as Marie Darrieussecq notes in the piece linked above, French writers are doing interesting biographies, crime writing, and other kinds of writing (not just novels of ideas, etc.)
Posted by Gregory McCormick at 12/10/2013 07:50:00 AM No comments:

Doing research this week, I came across this really wonderful piece from a few years back on the Estonian composer Arvo Pärt, in discussing his perhaps best-known piece, Für Alina :

I replied that this suggested another metaphor, because the tintinnabuli style - especially in the simple form in which it exists in "Für Alina" - consists of two lines. The melody, which proceeds mainly in steps up and down the scale, might be compared to a child tentatively walking. The second line underpins each note of the melody with a note from a harmonizing triad (the fundamental chord of Western music) that is positions as close as possible to the note of the melody, but always below. You could imagine this accompaniment to be a mother with her hands outstretched to ensure her toddler doesn't fall.

Pärt grabbed my own hand with excitement. "This is the whole secret of tintinnabuli," he exclaimed. "The two lines. One line is who we are, and the other line is who is holding and takes care of us. Sometimes I say - it is not a joke, but also it is as a joke taken - that the melodic line is our reality, our sins. But the other line is forgiving the sins."