Summer is my chance to see movies which I often can't during the year and yesterday I saw Ida. A fascinating little gem of a movie.

The film is set in 1961 in Poland and tells the story of a Anna, a young would-be nun who is told that her aunt, after many years of silence, has asked to meet her. The girl is an orphan, we are told, but we know nothing about her past or circumstances that have brought her to be raised in the convent. She has never left since arriving as an infant. She doesn't want to leave to meet her aunt but the mother superior insists. 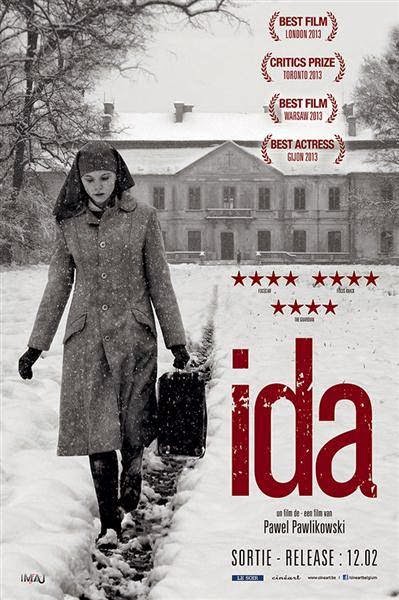 Thus begins an odd little romp: one part personal journey, one part road-movie, one part historical exploration. Her aunt is a deeply troubled woman and tells Anna almost immediately that her name is Ida and that she is Jewish. Anna has no reaction to this and the tense first few moments of the encounter with her hung-over, half-dressed 40-something year old aunt ends with her deciding to go back to the convent, to end this solitary life adventure.

But sitting in the train station, the aunt's heart softens (we see an earlier shot of her in her capacity as a judge, mindlessly watching a trial that has to do with one neighbor cutting another's hedges and how this represents non-socialist behavior, etc.) and she and Ida return to her house. The stark shots, the austere background noises: all of that remains the same but the film warms up almost immediately and the two set out to find the bodies of Anna's parents (and Wanda's sister).

It's not useful to explain more of what happens because it gets at the heart of why the movie is so interesting but it involves a road trip and a young handsome saxophone player in a nightclub.

This leads me to one of the most interesting things about the movie: the music. Most of it is incidental (characters playing records or musicians playing on-stage in a bar) and there are only a few scenes with actual background music. Other than that, silence permeates this film. Not only silence from music but not as much dialogue as one might expect.

I kept thinking of Kieslowski while watching this. Not that Pawlikowski is a similar type of story-teller. In fact, they are radically different kinds of story tellers and the only thing that they have in common is their (often) bleak settings and the fact that they are both Polish. Kieslowski uses music in (at times) manipulative ways, appealing to our emotional lives less than to our intellectual ones.

But I appreciated Pawlikowski's vision a great deal. It's not a flashy film; it's very, very understated and he allows his viewers to be intelligent and sophisticated without handing them pat little morals or emotions on a platter. Because there are no answers: the past is our constant companion. Whereas Kieslowski was interested in the ways we find identity and then locate the bonds which connect us to one another, Pawlikowski is interested in how we live within the framework of the past, putting its painful episodes away or letting them overpower us.

Ida is playing at Cinema du Parc  (with English subtitles) and at Excentris (with French subtitles) all week.

Finding the time to read

I've been noticing this year that even professional readers are talking about having to carve out time to read books. At the Festival this year, several hosts confessed that they needed to take a week and just read books assigned to them for an event coming up because they'd been too busy all spring to find any time to read. This is the first time I remember hearing this from so many people.

And even when I think about my own time, reading is never something that just comes naturally. I have to schedule time to read. I have to make it a priority or my time will simply disappear. After all, there are movies to see, TV shows to binge-watch, not to mention social events, friends, walking the dog, etc.

Tim Parks considers this issue in his recent article and also what it means to read nowadays. He predicts that certain stylistic features that readers used to revel in, passages which required a reader to slow down and re-read, admire, etc., this kind of writing will disappear. People simply don't have the time to revel in long descriptions or repetition for style's sake.

I was remarking on this a while back. I was reading Sarah Waters and while I loved the book, one thing which irritated the hell out of me was having 95 page chapters. I just couldn't break up my reading into such long chunks. Generally, I read on the metro, at home after work, before bed, on Fridays, and over the weekends. I don't have any children. But even so, it's hard for me to sit for an entire hour uninterrupted and read. I can do it sometimes but it's not very usual (though it used to be: I remember spending entire afternoons in a chair when I was younger and before I had a cell phone beeping or other distractions).

I think, too, that our reading habits have resulted in these series books: Knausgaard, St-Aubyn, writers who take a story and then write a new "installment" every couple of years. This used to be a death-knell in North American publishing (though the Japanese have been doing this for a long time) but it's now part of the literary landscape. And I have to admit I like it: I like not having to over-commit to one book for a week or two. If it's short, I can read it in a day or two and then move on to something else. Then go back and read Part II later, re-immersing myself in the story.

At any rate, it will be interesting to see how our frenetic and stolen moments of reading will affect the way books are published marketed and consumed.

The Boy by Marie Howe

My older brother is walking down the sidewalk into the suburban summer night;
white T-shirt, blue jeans - to the field at the end of the street.

Hangers Hideout the boys called it, an undeveloped plot, a pit overgrown
with weeds, some old furniture thrown down there,

and some metal hangers clinking in the trees like wind chimes.
He's running away from home because our father wants to cut his hair.

And in two more days our father will convince me to go to him - you know
where he is - and talk to him: No reprisals. He promised. A small parade of kids

in feet pajamas will accompany me, their voices like the first peepers in spring.
And my brother will walk ahead of us home, and my father

will shave his head bald, and my brother will not speak to anyone the next
month, not a word, not pass the milk, nothing.

What happened in our house taught my brothers how to leave, how to walk
down a sidewalk without looking back.

I was the girl. What happened taught me to follow him, whoever he was.
calling and calling his name.


From What the Living Do 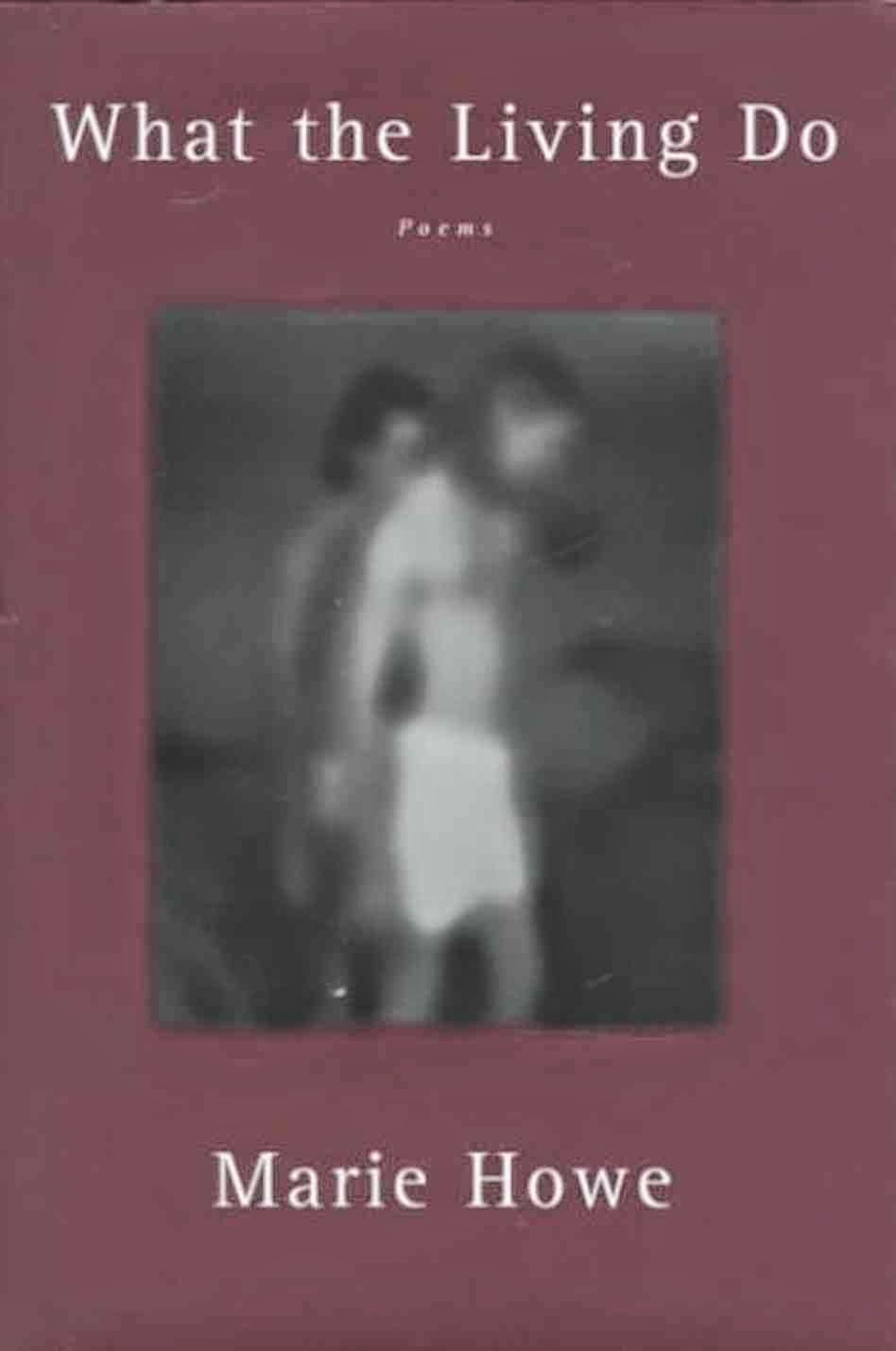 So that's it. A few weeks of down time, and 2014 is crossed out. A new Festival is now in the works.

For 2015, the Blue Metropolis Montreal International Literary Festival takes place from April 20 to 26, 2015.

We already have a number of authors confirmed and a few exciting projects in the works.

In the meantime, thanks to everyone for making 2014 a raging success. The 16th edition of Blue Met involved 233 events in 9 languages with the participation of over 100 authors from 15 countries. For Blue Met produced and co-produced events, as well as events produced by our partners, we maxed out at 32,000 visits for Festival-related events. Wow!

More importantly, we increased the attendance of hotel-based events by a whopping 35%!

Those are great numbers, people!

What I always say, though, is that we can never really rest too comfortably as the pressure is on to top 2014 by an even more successful 2015.