To Go to Lvov by Adam Zagajewski


To Go to Lvov

To go to Lvov. Which station
for Lvov, if not in a dream, at dawn, when dew
gleams on a suitcase, when express
trains and bullet trains are being born. To leave
in haste for Lvov, night or day, in September
or in March. But only if Lvov exists,
if it is to be found within the frontiers and not just
in my new passport, if lances of trees
- of poplar and ash - still breathe aloud
like Indians, and if streams mumble
their dark Esperanto, and grass snakes like soft signs
in the Russian language disappear
into thickets. To pack and set off, to leave
without a trace, at noon, to vanish
like fainting maidens. And burdocks, green
armies of burdocks, and below, under the canvas
of a Venetian café, the snails converse
about eternity. But the cathedral rises,
you remember, so straight, as straight
as Sunday and white napkins and a bucket
full of raspberries standing on the floor, and
my desire which wasn't born yet,
only gardens and weeds and the amber
of Queen Anne cherries, and indecent Fredro.
There was always too much of Lvov, no one could
comprehend its boroughs, hear
the murmur of each stone scorched
by the sun, at night the Orthodox church's silence was unlike
that of the cathedral, the Jesuits
baptized plants, leaf by leaf, but they grew,
grew so mindlessly, and joy hovered
everywhere in hallways and in coffee mills
revolving by themselves, in blue
teapots, in starch, which was the first
formalist, in drops of rain and in the thorns
of roses. Frozen forsythia yellowed by the window.
The bells pealed and the air vibrated, the cornets
of nuns sailed like schooners near
the theater, there was so much of the world that
it had to do encores over and over,
the audience was in frenzy and didn't want
to leave the house. My aunts couldn't have known
yet that I'd resurrect them,
and lived so trustfully; so singly;
servants, clean and ironed, ran for
fresh cream, inside the houses
a bit of anger and great expectation, Brzozowski
came as a visiting lecturer, one of my
uncles kept writing a poem entitled Why,
dedicated to the Almighty, and there was too much
of Lvov, it brimmed the container,
it burst glasses, overflowed
each pond, lake, smoked through every
chimney, turned into fire, storm,
laughed with lightning, grew meek,
returned home, read the New Testament,
slept on a sofa beside the Carpathian rug,
there was too much of Lvov, and now
there isn't any, it grew relentlessly
and the scissors cut it, chilly gardeners
as always in May, without mercy,
without love, ah, wait till warm June
comes with soft ferns, boundless
fields of summer, i.e., the reality.
But scissors cut it, along the line and through
the fiber, tailors, gardeners, censors
cut the body and the wreaths, pruning shears worked
diligently, as in a child's cutout
along the dotted line of a roe deer or a swan.
Scissors, penknives, and razor blades scratched,
cut, and shortened the voluptuous dresses
of prelates, of squares and houses, and trees
fell soundlessly, as in a jungle,
and the cathedral trembled, people bade goodbye
without handkerchiefs, no tears, such a dry
mouth, I won't see you anymore, so much death
awaits you, why must every city
become Jerusalem and every man a Jew,
and no in a hurry just
pack, always, each day
and go breathless, go to Lvov, after all
it exists, quiet and pure as
a peach. It is everywhere.

- Adam Zagajewski from Without End: New and Selected Poems

I am crazy about this Neopolitan tetralogy by Italian writer Elena Ferrante.

The novels chronicle the friendship between two girls growing up in Naples in the 1950s and through the 60s (I just finished the 2nd novel which ends in the late 60s). They are fascinating books and they detail a world that has vanished: a violent, rough and tumble neighborhood of working class kids in poverty who rarely, if ever, have the chance to get out and improve their lives.

Lina, the best friend, is from a desperately poor background and her best friend, Elena (the novels' protagonist), is no better. They are connected through their intelligence (it's never clear who "My Brilliant Friend" is supposed to refer to exactly: at times Lina seems the more brilliant one, though Elena is the one who manages to "get out" of the neighborhood through her intelligence and hard work) but their relationship is complex and contradictory, full of betrayals and resentments.

Anyone who's ever had a lifelong friend will relate to these books: the complex ways we love someone, the ways in which we compete, even if we don't want to.

I kept thinking of my first few years in Montreal: I was working at a community centre in Verdun and so many kids (people) who were born there never leave: they get pregnant at 16 or 17, get married, move a few doors down from their families and just stay. Once when some kids asked me where I lived and I said near McGill, they almost acted amazed that I lived "so far away," and only one had ever been there (once). I hardly ever go to Verdun nowadays and I wonder if things have changed much...

Of course, Verdun isn't nearly as violent as Naples of the 1950s but it reflects a similar kind of mentality: never put on airs, never try and forget where you come from. How place (poverty, dialect) is both a mark of identity and a limitation. How place is as much a badge as gender or race (maybe more so). It's something that North Americans, perhaps, don't quite understand in the same way as Italians which is so regional. In Verdun I witnessed a small aspect of it though perhaps it is something Canadians can grasp in a more limited way.

Another thing which struck me was the simple fact that violence is impossible to get away from: all the kids are beaten by their parents and then they get married and their husbands beat their wives and the wives beat their children. It's just the way life is. But that's not to say that the books are depressing or self-pitying, not at all. They are funny, moving, intelligent and the kind of book where you have to stop now and then and just reflect on what the author's doing or trying to communicate.

I raced through the first two novels and wanted moremoremore. The 3rd novel in the series (Those Who Leave and Those Who Stay) is out today but I am battling with myself: I want to read it but I also want something to look forward to reading over the Christmas break. So we'll see how long I can hold out.
Posted by Gregory McCormick at 9/02/2014 08:44:00 AM No comments:

Wanting and dissatisfaction
are the main ingredients
of happiness.
To want is to believe
there is something worth getting.
Whereas getting only shows
how worthless the thing is.
And this is why destruction
is so useful.
It gets rid of what was wanted
and so makes room
for more to be wanted.
How valueless is the orderly.
It cries out for disorder.
And life that thinks it fears death,
spends all of its time
courting death.
To violate beauty
is the essence of sexual desire.
To procreate is the essence of decay.
-Ruth Stone (from In the Next Galaxy) 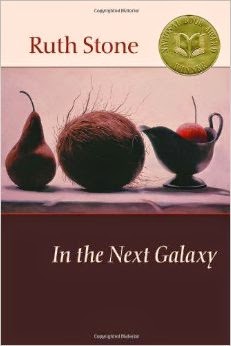