When I want to read in order to relax and escape the pressures of life, I read crime fiction. Ever since I was a kid and was obsessed with Sherlock Holmes (before the Internet was anything, I joined this club, The Consulting Detective, where we`d investigate cases and then `send away` for the solutions), I`ve been a huge fan of detectives, crime writing, and murder mysteries. The Mystery of a Hansom Cab (set in 19th century Melbourne) was an early favorite as was Wilkie Collins and Father Brown.

Without exception, contemporary crime writing is largely forgettable and the form is so firmly established now that though there are lots of great crime writers, there are few who do anything really fascinating with the form. 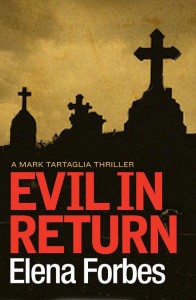 The last few days, I`ve been reading Elena Forbes and her 2010 novel Evil in Return. It`s a good read and I`ve enjoyed the pacing and the general timbre of the story. It`s forgettable though and in six months I could pick it up and read it again since I won`t remember many details.

To me what sets good crime novels apart are the settings: Sue Grafton`s books are all set in Santa Barbara; Louise Penny`s in Montreal and the Eastern Townships; Anthony Bidulka`s in Saskatoon. Reading a crime novel set in an unusual location is a good way of capturing the atmosphere of a city or region. Ernesto Mallo`s book, Needle in a Haystack, set in 1970s Argentina is a very interesting portrait of a city under the confines and fears of the Dirty War. In that sense, then, crime writing can serve as a kind of travelogue, introducing a location to a reader with the ability to show the real inner workings of a society: different classes, societal conflicts, personal conflicts, political changes, etc.

When I was in New York a couple of weeks ago, I met Teresa Solana, whose crime novels are set in Barcelona; her husband is the main English translator or Leonardo Padura, a novelist whose works are largely set in Havana. Been trying to get my hands on works by these writers, not only because they are translated (another interesting aspect of crime writing) but because the locations are interesting and make an otherwise set form slightly unusual. 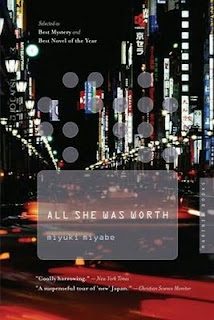 I find Stieg Larsson highly overrated. The first in his Millenium trilogy is a good read. But beyond Lisbeth Salander, his characters are flat, underdeveloped, and stock to a large degree. The last two of this series, and particularly the last one, is just about unreadable in my estimation (the last two could have been cut by about 30-40% and improved). Not really sure why he has become the darling of the crime writing world as he`s simply not that great of a writer. Much ink has been spilled on this new wave of Scandinavian crime writing but the influence of this region on the genre have been minimal, it seems to me.

There must be thousands more fictional murders committed every year than real murders. Particularly since most murders are far from compelling and don`t make good fodder for a crime novel.

For a really interesting approach to crime writing, try Miyuki Miyabe. Her books, all set in Tokyo, show a segment of Japanese society that we rarely see: the underbelly, black market, characters off the grid. Her books don`t even all contain murders yet they are still highly readable and entertaining. Fascinating stuff and I wish her work were better known in the West.
Posted by Gregory McCormick at 5/10/2011 09:33:00 AM