I've been loving this little book of poems by Patrick Friesen, called A Dark Boat.

Full of striking imagery and haunting lyricism, the book explores common every day themes (travel, working, nature) but with a dark twinge to them. This one, for example,

the room wants
to leave through
the open window

a widow walks
the hallway
looking for a way
back in

It's so simple on the surface: tulips growing juxtaposed against the notion of widowhood, but then the poem delves into a complexity with unusual phrasings like "the room wants to leave through the open window." There are passing references to Lorca (and a poem addressed to him) insofar as Lorca believed that "the timelessness of a poem depends on the quality and coherence of its images" (citation). Though on another side, there is a universality to these images and a debt to Lorca since the book seems to take the form of a kind of travelogue through Spain, made up of all the infinite number of moments or passing experiences that happen when we travel. And how can a poet travel through Spain and avoid nodding to Lorca? 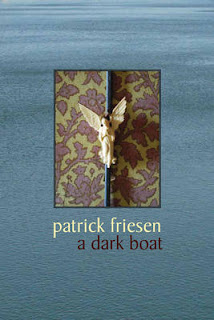 The shifting back and forth between images of thirst and water, of dryness and wet splatter, then, again, the occasional odd juxtaposition or phrasing: the dog backing up when the protagonist extends his hand and that perplexing line, "you don't know your age" (some kind of reference to not acting one's age?) and then the ending imagery of Christ drinking sangria (which, of course, has the same root as the word blood). The complex images and the simple language give these poems such a charming accessibility and I find myself repeating certain phrases over and over (it also makes me long for Spain).

Occasional photographs (taken by the author?) allow the poems open up somewhat when sitting alongside an image of a quiet street in Granada or boys swimming in a river. I really love this book.

Formerly of Winnipeg Friesen now lives on Vancouver Island. He's written many volumes of poetry and is also a translator and playwright.
Posted by Gregory McCormick at 5/14/2012 02:32:00 PM